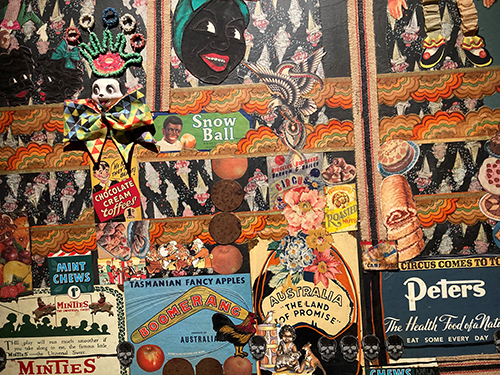 Highly paid by Ringlings and Barnum & Bailey, at one time he was considered a potential replacement for Rudolph Valentino after the silent film star died. He preferred the high wire and the gasps of live audiences. Con’s remarkable agility – drawing gasps from gallery visitors - featured in newsreel footage about ‘The Toreador of the Wire’ that screened as part of Karla Dickens’ celebration of the Indigenous people who boxed, ran sideshow attractions and helped keep all these community shows on the road.

Dickens, a woman of Wiradjuri descent now living locally, assembled, combined and modified ‘found objects’ collected over years as part of her art practice. They comprise an astounding grab-bag of memorabilia, from old sideshow signage – “Win a Tweety for your Sweety”, and the Laughing Mouse Game: Every child player receives a prize – as well as original constructions.

The exhibition is vast, intricate to the point of overwhelming, and as might be expected, highly charged with comments on the racism that infected Aboriginal participation in popular culture, not least the kind that made ‘Con Colleano’ pretend to be Spanish, and sometimes even from the Hawaiian royal family. Of course, he had the last laugh, and the income to prove it.

One standout was a grotesque collage of masks, perhaps from a ghost train, bearing the caption, “True horror is Australia’s history of massacring its first people”.

The artist’s found objects are immensely diverse, from advertising posters and sideshow games such as lucky envelopes and ping-pong balls, to boxing gloves and a spruiker’s drum from the Sharman troupe’s tent, souvenired by renowned painter and sometime boxer, the late Digby Moran.

This strikingly original and deceptively challenging show contains  a host of visual surprises as well as messages both subtle and blunt, the latter epitomised by the pig sculpture dubbed ‘Lawless Piggy’ that wears a NSW Police hat and bears the caption ‘Warn a brother’.

8 Images from exhibition - from top left