The jumble of recovery 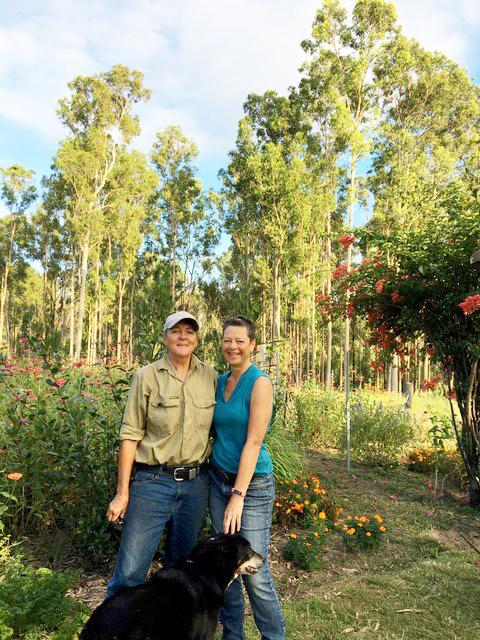 Hayley Katzen writes of the impacts of cancer and bushfire, and the long recovery process from both.

I empty the rain gauge of its 160 ml and walk back to the house, my pink gumboots sloshing through puddles. It’s a year and two months since the Long Gully Bushfire stormed our area on 8 October 2019. Today the bush around our house is a blur of black and green, breathtakingly beautiful.

In amongst the sculptural black dead wood are trunks coated with a fuzz of green, some again bear a canopy. Many of the spotted gums have followed their usual cycle and lost their bark, some are light emerald green, some orange. But for others, burned bark still clings to their trunks, red sap weeps from wounds. Even those that stand tall and proud, now have ruts etched into their trunks. Scars.

My partner Jen’s garden is a sea of gold this year – nasturtiums, cosmos, marigolds and sunflowers – dotted with cornflowers and sprays of tiny cottage mix flowers. Soul food, Jen calls her flower garden. It’s how she processes grief – life, I suppose. Over these last decades, I - who lack the gardener’s disposition - have been a grateful and wide-eyed beneficiary of her flower gardens.

A wilted sunflower. That’s how I looked according to my GP when in late February 2019 I saw her about unusual exhaustion, and digestive problems. Thankfully she ordered a wide range of blood tests. Some three weeks later the diagnosis was confirmed in a Gold Coast Hospital: Stage 3C Ovarian Cancer that had metastasised to the peritoneum. After nine weeks of chemo, the surgeon was able to operate. He removed cancer from 17 places inside me. I learned the names of body parts because I’d lost them. I was lucky it was operable.

I was lucky again on Tuesday 8 October 2019, the day that the Long Gully Bushfire stormed our area. Unlike the two locals who died. Unlike my neighbour who lost his grand design of a house.

Jen and I were home that Tuesday. We saved the house – if not the outbuildings, the drought hay for our cattle, water infrastructure and fences. If the fire had struck on the Wednesday we’d have been 125 km away in Lismore where I was having chemotherapy. Lucky.

Five weeks after that fire, in late November, despite the losses and exhaustion, the shocking changes to lives and landscape, the black talcum powder and dust underfoot, the still smoky air, our small community held ‘Ewingar Rising’, a three-day bushfire benefit recovery concert. It raised our spirits – and together with associated fundraising drives, $78,000. As Anne Leadbeater from Kinglake so aptly said when she visited our community hall after the fires, “droughts isolate and bushfires galvanise communities.”

But natural disasters – including cancer - seem to have three distinct phases. First there’s the emergency, then the response and then the recovery.

These days the word ‘Recovery’ is everywhere: there’s a National Bushfire Recovery Agency, federal and state government Disaster Recovery Grants and a myriad of non-governmental recovery grants. Funds to help people rebuild homes and businesses, even funds to strengthen communities and rebuild well-being – if you can navigate the paperwork.

I’m intrigued by the meaning and process of ‘recovery’. For my bushfire-affected community. For the bush. For myself.

Three months after the fire we had a small flood. Trees sent out epicormic shoots, bright pinks and greens sprouted from black ironbarks, lurid neon green sprouted from grass trees, and in our garden weeds and grass and wild zinnias bloomed. My body too was sprouting: again hair covered my scalp, I had eyelashes and patchy eyebrows. Like the music festival, the new growth in the bush and of my body was invigorating and exciting. Joyful. Everywhere and all at once, amongst the burn, there was blooming.

As the country went into lockdown over COVID-19, Jen and I sat on the front veranda. “Can we keep those burned bits on the bay tree,” I asked, “for just a bit longer?”

The bay tree, just a metre from our house, was two-toned, a balloon of crunchy brown leaves and a few wands of deep green new growth sprouted from the base.

Jen laughed. “What? There aren’t enough burnt trees around?”

I insisted. The two-tones were comforting; they reminded me of change and transformation, of possibility.

It’s fifteen months since that fire, and seven months since a second surgery in June 2020 removed another tumour. Again, I was lucky; again I’m ‘all clear for now’. So very grateful. Now we ‘watch and wait’ with tests every three months.

‘Recovery’ has come to seem like an ongoing, seemingly endless, process. It is so very different from that initial invigorating and exciting ‘response’ to the ‘disaster’. As I’ve sought to re-establish a life free of cancer treatment, as we - and our neighbours - have cleaned up and sought to re-establish our homes and farms, our community has rarely gathered, other than for fire brigade meetings.

Perhaps like droughts, recovery leads to isolation, particularly during a pandemic. Certainly, recovery is quieter and more private, devoid of the drama, the energy and tangible changes evident during the other phases. It may seem ‘inspiring’ to outsiders and sometimes it is indeed invigorating but mostly it’s slow and tedious, messy and confronting, chaotic and bewildering.

Finally, new branches grew from the base of the bay laurel, some weepy, some upright. Fresh and strong with the suppleness of new life, they were overtaking the dead wood. I realised the dead wood had begun to seem an insult, as if my personal tangible reminder of possibility might be harming the tree. So in December, slowly, awkwardly, carefully, I pruned the dead wood and its dried leaves.

I feel a tad responsible for how the bay laurel has grown, a little embarrassed I let it get to this. Just as I’m sometimes embarrassed and disappointed by my body – that I get so tired still, that symptoms send my mind wondering if the cancer might be back again, that I’m unsure where to focus my energy given my body’s new constraints and ovarian cancer’s reputation for recurrence.

Despite the uncertainties for my body and this bushfire-prone landscape and community, my heart lifts when I walk amongst ironbarks that again have silver leaves and spotted gums bare of bark. In the background is the soundtrack of my neighbour’s generator as he builds himself another somewhere to live.

The trees are my soul food, reminding me of change, of seeds and new growth, of cycles and seasons. Like the bay laurel’s jumble of dead stumps and new branches, recovery – or perhaps life itself – is patchy and chaotic with a rhythm of its own.

Hayley Katzen’s essays have been published in Australian and overseas journals and anthologies. A review of her memoir Untethered appeared in NorDocs Summer 2020-21 issue.