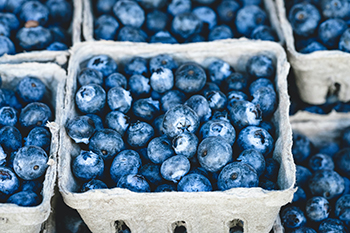 While the ‘anti-inflammatory’ berry may indeed lower our risk of heart disease and cancer it appears that its impact on the environment – depending on the growing site – may be less than healthy. This is the initial conclusion of research by Southern Cross University scientists who are working with the NSW Government’s Clean Coastal Catchments initiative and in collaboration with Monash University.

The study’s focus is on local water quality and the impact of blueberry cultivation on steep slopes experiencing high rainfall and it has put the industry under an environmental cloud because of nitrogen runoff into creeks that drain to the famed Solitary Islands Marine Park.

Concerned Coffs locals have begun buying into the issue, with a resident telling The Sydney Morning Herald, “Blueberry farmers have walked roughshod over us, their neighbours, for years, spraying chemicals that run off into creeks, setting off loud noises to scare birds and operating deafening wind turbines so the frost won’t settle on the fruit.

“One wonders what will happen to these eyesores when the bottom falls out of the blueberry market and the soil is so contaminated that nothing else will grow there.”

The market is already under threat, according to farmer Iqbal Singh Grewal, who told the paper that while the industry is improving run-offs its finances are turning sour.

“His farm switched to blueberries about five years ago after banana profits dwindled,” the paper reported, but “It costs Mr Grewal’s farm about $20 to produce a 1.5 kilogram tray of blueberries that he can sell for $21.50 if he’s lucky.”

The farmer added, “Everybody’s growing blueberries around Australia,’’ from the Atherton Tablelands down to Tasmania.

But the local industry is the one that – so far, anyway - has attracted attention, with Coffs Harbour City Council commissioning SCU to investigate the environmental impacts of the industry.

A 2018 study had found levels of nitrogen soared after rains as fertiliser from farms washed into rivers, reaching 695 times that of drier conditions –

‘‘These [nitrogen oxide] loads were amongst the highest reported for catchments on the east coast of Australia, and similar to loads in rivers throughout China, Europe and India with strong agricultural or urban influences”

Shane White, a PhD researcher at SCU’s National Marine Science Centre, said, “These waterways remove nearly all the nitrogen during dry conditions, but lose the ability during rain events when large amounts of nitrogen in creeks can escape to the coast.”

Hearnes Lake, between Coffs Harbour and Woolgoolga to the north, is the last naturally-occurring filtration defence before catchment run-off enters the iconic Solitary Islands Marine Park.
“About 50% of the nitrogen is sourced from fertilisers, and the rest from treated sewage in the Hearnes Lake catchment. Management of both sources is necessary,” Mr White said.
“Treated sewage is released to the farms to irrigate the crops and is relatively easier to manage but fertilisers are more widespread and complicated to manage.”
Praktan Wadnekar, also a PhD researcher at the NMSC, was the lead author of one of the latest reports.

“Nearly all creeks with agriculture and urban land use had water quality issues. Hearnes Lake, Woolgooga Creek and Coffs Creek are the main areas of concern,” said Mr Wadnerkar.
“We are working with farmers, industry and government to improve on-farm practices and provide a framework to protect the waterways from harm,” Shane White said.

One critic is Sally Townley, a Coffs Harbour City councillor, who said land clearing could be added to the ‘‘litany of issues” generated by the industry, not least because farmers don’t need to lodge a DA for so-called intensive plant agriculture under the local environmental rules: ‘‘Almost every other form of development requires consent,’’ Dr Townley said.

‘‘So if you want to build a house, shed, pool, et cetera, you apply for consent via a DA.’’

Key recommendations of the SCU study include:

· Planting native vegetation on both sides of creeks to reduce the amount of nitrogen entering the creek.

· Install tailwater catchment ponds on farms to catch the high water flows and slowly release this water to the creek.

· Reassess the use and suitability of nitrogen-rich recycled sewage on farms in coastal catchments.

Where has all the taste gone? 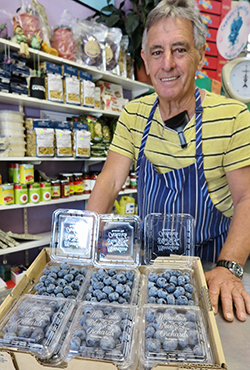 Bluntly put, most blueberries sold in Australian supermarkets are small in size and taste bland, at best, or even sour. They are part of a species-wide trend in fruit and vegetables produced for the commercial market. Strawberries have become bigger but are almost always sour, while ‘tasteless tomatoes’ are often the modern norm.

Chasing answers I approached long-time ‘fruitologist’ Alex Coronakis (photo left) who runs Tropicana in Lismore’s central Keen Street. First, he offered me a taste of what he regards as the best blueberries on the local market, grown not on the steep hillsides around Coffs Harbour but in the red soil of nearby Wollongbar by one of the region’s best-known horticulturalists (and philanthropists), Ridley Bell.

Mr Bell is a farmer par excellence who has worked on improving the size – the Big Blueberry, indeed - and the taste of his crop through DNA enhancement. There is no doubt that his product is superior to that commonly sold in the major stores (although some of it does find it way to supermarket shelves), and at nothing more than a slight premium price increase.

Clearly, a high-quality product can be produced, and without a deleterious impact on the environment.