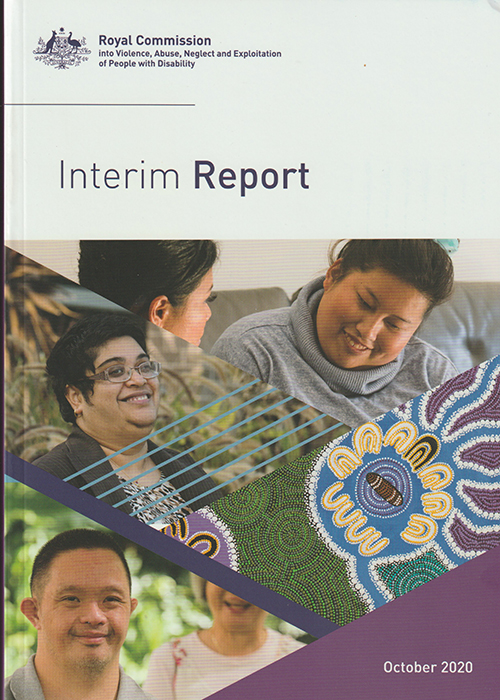 Robin Osborne looks at the Interim Report of the Disability Royal Commission.

‘A big parcel has arrived in the mail,’ my wife said, ‘it feels like a book,’ this being accompanied by a roll of her eyes to suggest that I shouldn’t be acquiring any more books, given the bulging state of our shelves.

This was not my much-awaited copy of The Shape of Sound  but the Interim Report of the Royal Commission into Violence, Abuse, Neglect and Exploitation of People with Disability. The 561-page document, tendered to the Governor-General near the end of last year, is aimed at echoing the voices of Australians with disability -  estimated to number 4.367  million in 2018 – and recommending strategies and processes for addressing the issues listed in the title.

The 1.7kg tome is beautifully formatted and bound with a cover featuring an Aboriginal painting in what seems to be the de rigeur manner of contemporary government publications and corporate reports. The featured artwork, ‘Respectful Listening’ by Wiradjuri artist and disability advocate Uncle Paul Constable Calcott, represents the story of the seven Commissioners carrying their message stick and travelling across many language groups and communities to gather stories.

Another disturbing comment is, ‘Adults aged 18-64 with intellectual or psychosocial disability experience higher rates of all types of violence than adults in that age group with other disability types.’

Such findings mirror in their bleakness those that have emerged from other RCs, such as those into aged care, the institutional abuse of children and mental health (in Victoria). Taken together, they show that Australia’s ‘egalitarian society’ is in fact one where the powerless and often least advantaged suffer a range of indignities, not to mention illegal acts, that take politically driven inquiries to uncover, and hopefully remedy.

Announced recently, after opposition and crossbench presssure on the government, is an RC into the mental health and suicide rates of Australian ex-service personnel.

Such reports always raise key questions about whether and how the RC might help to improve the lives of the people under scrutiny, and, not least, when this will occur. If at all, of course.

The terms of reference for this inquiry decree that the final report must be delivered by 29 April 2022. To the average person, not least those suffering, this seems like an age, and in the interim more bad news is bound to surface, with public hearings scheduled to be held each month for the rest of this year. They will be manna from journalistic heaven.

After hundreds of pages covering harrowing testimonials and submissions we reach the section ‘Our future direction’ advising that a companion volume will present ‘an evidence-based argument for change, with practical and implementable recommendations for reform…’

So far there are no specific clues about what should change – apart from pretty much everything, of course - nor a mention of the predictably huge cost of remedying the identified systemic failures that increase the risk of violence, abuse, neglect and exploitation for people with disability.

Meanwhile, further information about the barriers faced by Australians with disability continues to emerge.

Ms Eastman said, ‘The totality of the evidence supports the Royal Commission finding that there are systemic barriers experienced by people with disability in obtaining and retaining employment in the open labour market.’

Will there ever be a resolution to the challenges faced? It is a question that more than four million Australians, as well as their family members, friends and carers, are entitled to ask.

What about the NDIS?

No inquiry into the disability sector would be complete without an evaluation of the National Disability Insurance Scheme (NDIS), which supports one-in-ten Australians with a disability and is funded by federal and state/territory governments. The $25 billion scheme rocketed back to the news recently with the suggestion that the Morrison government plans to change the way NDIS applicants are assessed. The aim is to have NDIS interviews conducted by privately contracted allied health companies, rather than by applicants’ treating doctors, in order to  “determine the significance of a person’s disability”.

As the interviews will run for three hours it seems an applicant’s endurance will be tested as much as anything else.

This proposal, based on a report fully accepted by the government last year, has unleashed a storm of criticism, including being dubbed a ‘sham’ by Opposition spokesperson Bill Shorten, an architect of the NDIS. However, the backlash has come too late to be included in the Royal Commission’s report, and probably would not have been mentioned anyway, as it is ‘yet to start our substantive inquiries into the safety and quality of services under the NDIS’.

Calling the NDIS ‘one of the most significant changes to social policy in Australia’, the report notes the ‘significance of the NDIS model to many areas of disability services, including homes and living and employment’, adding ‘this appendix [D] gives a short overview of the development of the scheme and its original intent’. It adds parenthetically and somewhat tantalisingly, ‘(noting that this may differ from how the NDIS currently operates in practice’).

It is no secret that the NDIS is widely seen as under-performing.

With the Commissioners still gathering evidence, the jury remains well out on the running of the NDIS, as well as on how to protect people with disability from abuse. So much so, in fact, that they have apparently asked the Prime Minister to grant a significant extension to the reporting deadline, from April 2022 to October 2022. At the time of going to press, no decision by the government has been forthcoming.

Whatever date prevails, the requested one or a compromise, implementing (or not) the Royal Commission’s many recommendations will fall mostly to the next Australian government, whether this will be Morrison Mark 2 or another remains to be seen.

One thing does seem likely – the next volume of the report will be equally hefty.