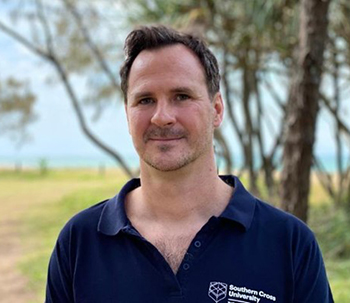 In Australia he is leading a subsection of the Reef Restoration and Adaptation Program (RRAP) focusing on how the reef might better manage the challenges of climate change as well as restoring some of the damage already done.

RRAP is a collaboration between various universities, The Australian Institute of Marine Science, the CSIRO and the Great Barrier Reef Foundation, which received a controversial federal grant of $443M in 2018, and the government.

Cloud brightening involves pumping atomized sea water into the air above the reef: ‘Each droplet, which is already infinitesimally small, evaporates and just three percent or so of that is salt,’ Dr Harrison explains.

‘And it’s that tiny little salt crystal that goes on to be a nucleus for a cloud droplet. We’re not actually creating clouds… when the cloud forms there’s a given amount of water content, each droplet needs a nucleus to condense around; if we provide more of these cloud condensation nuclei, the same cloud reflects more sunlight.’

The RRAP sub-program team led by Dr Harrison is also looking at floating reflective surface films and creating a sea fog. Spraying seawater to create a fog, like cloud brightening, would aim to reduce the sun’s energy reaching the ocean surface but target a much smaller region.

“We’ve got a window that is rapidly closing, to do something, but if we can get some of these ideas to work on a really big scale… modelling suggests it might be enough to alter the trajectory of the reef and help to transition it through this period but only if we also have very, very aggressive action on climate change.’

Amidst all the remediation research, what is required is proper government commitment, according to Dr Harrison.

‘We need government policy to divest in fossil fuels and invest that into driving the change to electric cars and renewable energy sources, and in carbon sequestration technologies that can help by taking some of the carbon dioxide back out of the atmosphere.

‘To implement policy, the tax on carbon which we nearly had but then we lost, I think that would help a great deal.’

In terms of the fisheries, Dr Harrison explains, ‘We’ve got these statistical models that predict how many fish are out there and how many we can catch each year safely, but this predominantly statistical approach has been around since the 50’s.’

So the goal is to promote a more ecosystem based approach.

Dr Harrison is passionate about using modelling tools to help avoid bycatch, which is any species inadvertently caught while fishing for another species. He hopes that satellite data-driven tools will help identify the location of overlapping target and bycatch species, and provide information on the conditions where this happens. Such knowledge would enable fisheries managers to avoid unnecessary bycatch and potentially create dynamic areas where fishing is prohibited.