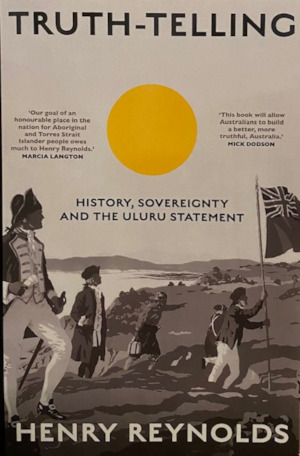 Professor Henry Reynolds, the foremost chronicler of this country’s frontier wars, has delivered another seminal reference with Truth-Telling, yet again debunking the myth of terra nullius – as if the High Court rulings were not enough – and adding further weight to studies such as Bruce Pascoe’s inestimable Dark Emu, and its companion volume for young audiences.

Topics covered include the choice of Australia Day, dubbed by many as Invasion Day, and the frontier massacres of the 18th century and beyond, denied or minimised by those who speak of the ‘black armband’ view of our history. A particular focus is on how the memories of these atrocities and the courage of the people defending their land are pushed aside.

The book discusses not only denial of sovereignty but the lack of a treaty with First Nation people which is different from other countries such as New Zealand, Canada and the United States. The result was the shocking frontier wars that killed an estimated 60,000 people in a violent takeover that should have been avoided. Henry Reynolds advocates for a new frontier war memorial institution to remember the dead and educate us about this important piece of our history.

In a timely analysis this book helps readers understand the significance of the Uluru Statement from the Heart with its three themes – Voice, Truth and Treaty. This is the path forward that is needed now to improve the quality of life for our First Nations people.

To quote from the Uluru Statement: The sovereignty is a spiritual notion: the ancestral tie between the land, or ‘mother nature’, and the Aboriginal and Torres Strait Islander peoples who were born therefrom, remain attached thereto, and must one day return thither to be united with our ancestors. This link is the basis of the ownership of the soil, or better, of sovereignty. It has never been ceded or extinguished and co-exists with the sovereignty of the Crown.

The full statement and the lead up to its historic signing off in 2017 can been seen here https://ulurustatement.org/the-statement.

We are now familiar with the Black Lives Matter campaigns around the world and more recently the demonstrations around the worrying statistics on Australian Aboriginal deaths in custody. At the time of writing the toll stands at 474 Aboriginal and Torres Strait Islander people who have died in custody since the Royal Commission in 1991, including five people since March this year.

Increased pressure is now being placed on the Australian Government to consider the Uluru Statement of the Heart, bearing in mind the issues that lead to deaths in custody are so often transgenerational. This timely and powerful book adds further weight to this imperative and deserves to be read by our political representatives of all persuasions.

Justice for First Nations people is not a partisan issue but a matter of human rights that requires not only emotional commitment but practical action across the board. How many more inadequate Closing the Gap reports do we need to read? Or, for that matter, how many more excellent books of the kind Henry Reynolds produces to convince us that ‘Australia’ was illegally claimed for a distant king, forcibly settled and governed injudiciously ever since?