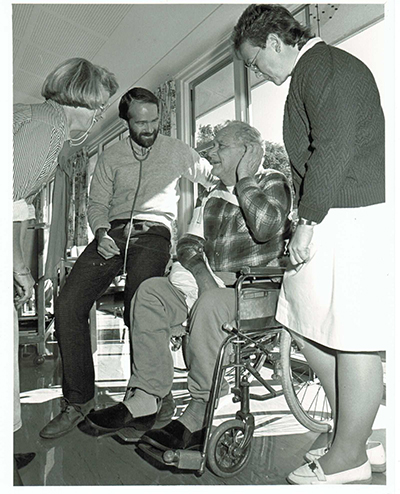 Geriatrics interested me, and I enjoyed the variety of work, presentations of patients and the clinical detective work required when assessing and treating the person. (Patient-centred care ‘101’!) I have been very privileged to see such a variety of rare and unusual presentations and the non-unusual ones. I tried to see the person with the disease rather than the disease with a person, and hope I have succeeded.

That was the context of applying for a Consultant position at St Vincent’s Hospital, Lismore in August 1984. SVH was at that time a public hospital but had the vision (and still has) for inclusiveness and providing for everyone in the community regardless of age. I need to confess - and obviously, this was pre-internet - our thoughts were, having watched A Town like Alice, that Australia was 98% desert. Lismore was a wonderful surprise; everyone was incredibly welcoming. It was also a time for the influx of other young Consultants (Drs Cook, Herdman, Ashwell, Laird, Townend, Curtin, to name a few) and we made friends for life.

Dragging along Cate and three young children to Australia (not Scotland as she had hoped), I began work on 11 February 1985 for the next adventure in the next new country. Within two weeks, we had our eldest at school, bought a house, and so it was for 33 years. We thought we’d give it five years…

Being the first Area Geriatrician meant no one knew what I should do or how to do it; just ‘see people in Nursing Homes and get old people out of hospitals’ was (and still is!) a common misconception of the role of a Geriatrician.

I had carte blanche to follow my Kiwi boss’s advice and set up a service that helped the community. The Geriatric Assessment Team was already established - the first innovation was a Respite Service with four beds in St Josephs, Lismore and two in Campbell Hospital, Coraki - interestingly, more beds than north of Newcastle. It ; ran for around six years before the Commonwealth caught up!

The other successful innovation was an ‘At-Risk Register’, where I met for an hour fortnightly with community groups, e.g., Home Care to discuss community clients at risk, which successfully ran in various settings for over 15 years.

Being the Geriatrician, I was also the Consultant for the 25 rehabilitation beds at St Vincent’s, having to learn to work with, and manage, the multi-disciplinary team. There was a lot to learn as the medical system in NSW was very different to the UK and NZ.  Mentorship was lean, and there was little contact with the other physicians in those early days. ‘Under resourcing’ affected all of us, so we were all swamped. It took about two years to feel settled in. As well as running the Clinical Services I was on the SVH Executive, with several committees for more than fiveyears. Luckily, I had plenty of energy.

We were given eight beds at Coraki for Rehab and the Geriatric Day Hospital (now Carroll Centre) in my first year. After my only support, a nonclinical Doctor left after a year,  Dr Doe Bacon joined me and saved my life. We ultimately worked together for 30 years.  We managed all the inpatients in the two sites and the respite beds in all 33 rehab and six respite. Impossible to do this now. As Doe gained experience in the wards, she took a lot of the burden from me, and I expanded the community consultation service. Dr Fiona Wagner, another lifesaver, joined us in 2002.

It was not all work and no play. There was the annual Rehab sports day with patients and staff participating, plus the fantastic day-to-day interactions that made light of the basic ward, which had curtains for doors in the patient toilets and eight men in one room... great working environment indeed.

But service development is not a static beast. To raise the profile of Geriatrics, I visited neighbouring towns (Ballina and Casino, for example) to lower the threshold for referrals. The GAT became ACAT which expanded to include a Neuropsychologist, Psychogeriatric Nurse, and Gero-psychologist.  The increasing level of professionalism in the multi-disciplinary team helped with the growing awareness and demands of the challenges associated with Dementia.

The Dementia Outreach Service was another innovation implemented at this time. In 2001, Cholinesterase Inhibitors came on the PBS, with a dramatic rise in referrals, with the waiting list time growing from two to six months. It was demanding but I began to appreciate the value of drawing tests. These provided a quick adjunct in clinical assessment for people presenting with mild cognitive impairments on MMSE assessment.[1]

In 2006, the new Rehab and Transitional Care Wards and ACAT offices were opened at Ballina District Hospital. For some six years, my name was at the end of the bed of 50-54 patients. In 2012 a Consultant in Rehabilitation was appointed, and I moved to Lismore Base Hospital to attempt to set up a Geriatric Evaluation Unit - the date of opening, frustratingly, is still to be determined.

A much-needed second Geriatrician position was appointed in 2013, allowing me to go to three  days a week and enjoy long weekends (which were still a day short!). Future planning had us move three years ago to Terranora, closer to where our two sons and their families live, downsizing the garden and upsizing the house. With a daughter living in Edinburgh, we travelled a lot.

COVID-19  has helped by attracting Dr Tony Bragg to a Geriatrician position in 2020. He is joined by Dr Rachel Jones, who has more than competently taken over my role while I am on twelve months’ Long Service Leave.

I have been very fortunate to work with so many amazing people over so many years, making light the task of raising the flag of Geriatrics, and there are so many people - patients, colleagues and friends - to whom I have a debt of gratitude

I can ride off into the sunset (but not the desert), knowing geriatrics is in skillful, competent and enthusiastic hands. Thank you, everyone.

It takes a special clinician with a broad range of skills to deal with the complexities and challenges of geriatrics. It involves diverse skills in managing complex chronic diseases, comorbidities, individual psychosocial issues, social determinants of health and family dynamics. Here in the Northern Rivers of NSW we have been blessed for 36 years with an enthusiastic geriatrician, who for many years was the only specialist in this field and has led the way to develop the health teams so much needed within our ageing population.

And I am talking about Dr Hugh Fairfull-Smith, the Scottish trained geriatrician from the University of Aberdeen. He has not only connected so well with our older population but has been a great support for GPs and specialists who have relied so much on his wise advice, clinical acumen and wisdom.

It is now time for a well-deserved retirement after 36 years of commitment in older persons health, but I am sure it will be a busy retirement with family involvement and at least one of his favorite activities, namely cycling.

Photos below: Left:Dr Hugh-Fairfull-Smith with his wife Cate; Right: At the retirement celebration for Dr Hugh Fairfull-Smith 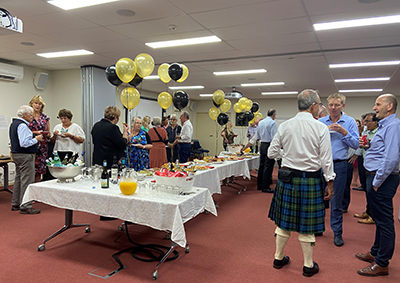