Book review - The Devil You Know 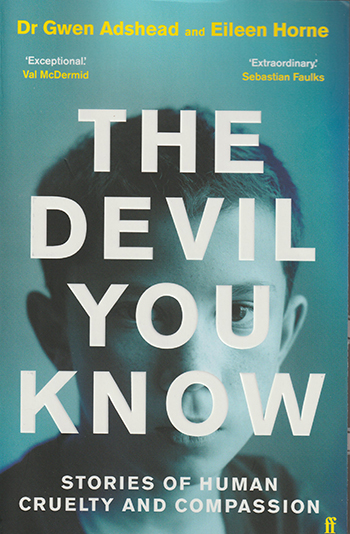 The title screams Netflix crime series, and no doubt the true stories contained in this remarkable book have the makings of one, but this memoir is by no means sensational, despite the harrowing nature of the tales. Credit for this goes to the main author, British psychiatrist and psychotherapist, Dr Gwen Adshead.

The likelihood that a streaming service might come sniffing around is that the co-author of these Stories of Human Cruelty and Compassion, to quote the sub-title, worked for twenty years as a television drama producer and scripted BBC radio dramas.

No doubt the material evinces all the necessary responses from a reader - shock, revulsion, disbelief, and, surprising as it may seem, some humour, and not always black. The stories are recounted in short chapters by eleven of Dr Adshead’s many patients over the years, all of them imprisoned for violent crimes, often ghastly ones.

Reading that, “Every violent crime is a tragedy for the victim and their families,” we nod our heads, only to be told that this is so “for the perpetrators” as well.

“I am not here to argue that any violent action should be excused,” Dr Adshead writes in the introduction, “or that our prisons and secure hospitals should be emptied… [yet] Over the years, I’ve come to think of my patients as survivors of a disaster and my colleagues and I are the first responders.

“I meet them at a turning point in their lives and help them come to term with a new identity, which may feel indelible; as one of my patients memorably put it, ‘You can be an ex-bus driver but not an ex-murderer’.”

Dr Adsheads describes her visits to prisons and forensic mental health institutions, some quite Dickensian - the screaming, the banging of metal doors and so on – and recounts her sessions with men and women who have killed relatives and friends, and unknown members of the public. Who have expressed regrets or not, and been willing (mostly) or not to engage with a medical professional.

‘Charlie’ had been jailed for her role in a teenage gang killing of a homeless man… they taunted him, pushed him over, stomped on him. She was kept in longer than the others because of her unrepentant attitude. In session, she said, “I don’t want to go over all that shit again… There’s nothing for me out there, you know? And I took a life, so why should I have one?”

Dr Adsheads observes, “Unlike many other big events in life, there is no how-to manual for life after homicide… how to make progress or how to handle a new, alien identity as a convicted murderer. Therapy gave them some tools to do that.”

Earlier in her career of consulting the imprisoned the author says she was “getting deeply into reading and writing about early childhood attachment,” noting that studies as far back as Freud showed insecurity as “a risk factor for a range of psychological problems, including mood regulation, psychosomatic disorders and difficulties in forming close relationships with family, partners and even health care professionals.”

If ever she needed first-hand proof, her experiences with this tragic, often loathsome – to the outsider, at least – cohort of offenders provided it in spades. Cohesive families and happy childhoods did not figure in their early lives. In equal measure, her compassion and professionalism cannot be praised enough, and don’t be surprised to learn that a television series ‘based on true stories’ is already in the works.