What are Australians learning from COVID-19?

A commentary by Robin Osborne

It seems a fair bet that few Australians, including medicos, could not name this year’s seasonal flu vaccine, nor identify the company that manufactured it.

Mine was called FLUAD Quadrivalent, hardly a catchy name, made by Seqirus, which their website says comes from the message of 'securing health for all of us'. The ‘us’ part is obvious, anyway.

Headquartered in New Jersey, the firm is part of the Australian-founded, now global CSL Group, and that’s probably all you need to know because no one – except anti-vaxxers – is questioning this government-endorsed vaccine’s safety or comparing it against products from other companies. From the consumer’s perspective, you’ve either had the seasonal flu shot or you haven’t, and to its credit no one’s dies of blood clot complications or has more than a slightly sore arm.

The public’s awareness of COVID-19 vaccination is a different scenario, yet another sign of how much the coronavirus has turned the world upside down. Whether or not you’re unlucky enough to contract it, this global pandemic means nothing will ever be the same again. One of the ‘new normals’ is the population’s remarkably enhanced awareness of the various formulations being thrown against it, as well as the hitherto anonymous people who are doing the throwing.

Most Australians can now reel off the names of the vaccines, or at least those available in this country. Eighteen months ago these would have been pharmaceutical esoterica… AstraZenica, Pfizer, Moderna - perhaps Johnson and Johnson, if only because they also make BandAids.

The overseas brands include China’s Sinovac, portrayed as little more than the Communist Party’s attempt to curry favour in developing countries, and Russia’s nostalgically named Sputnik.

The country’s Chief Health/Medical Officers are also in the spotlight. Previously these people, usually with a medical background, work discreetly. Nowadays, like America’s Dr Anthony Fauci, they’re central to media conferences fronted by the Prime Minister or Premiers, called upon to provide clinical backup for the political messaging. Fortunately, they seem more comfortable than Fauci with Trump.

Enter the eminently qualified and self-effacing Dr Brendan Murphy, ‘Australia’s Dr Fauci’ until he moved from CMO to head the federal Department of Health. Step forward, Dr Paul Kelly, his successor with a star singer’s name, and his deputy Prof Michael Kidd. They must feel they’ve gone down Alice in Wonderland’s rabbit hole.

In Victoria there’s Prof Brett Sutton, as much an ‘everywhere man’ as Premier Andrews, back after his fall, and in NSW Dr Kerry Chant, now on a much larger stage than when she visited Lismore to speak in a council debate on water fluoridation. Who would have thought it? In Queensland Dr Jeannette Young is attacked because of her association with the much maligned – except outside Queensland – Premier Annastacia Palaszczuk.

Early last year these public health doctors were almost totally unknown outside their areas of operation. Now they’re as close to being identities as public figures can be without engaging in a scandal. Their work hours and responsibility are massive, made worse by some of the citizens they’re trying to protect engaging in stupidities like hosting parties – hello St George Dragons players - and refusing to wear masks in clearly vulnerable situations, like a Bowral health foods store.

Overarching this public awareness of COVID-19 management is the government’s handling of the vaccine rollout, dubbed the ‘strollout’ by some critics, and the promotional campaign aimed at encouraging vaccination by those eligible to receive what are unappealingly called ‘jabs’. Hello, Boris Johnson.

To put it kindly, this has been a moveable feast.

AstraZenica, the vaccine Australia managed to get most of, was initially said to be geared to the over-60s but, after some overseas experience, was deemed potentially lethal to younger people because of blood clot risks. The acceptable age has since been revised downwards, and then down further as the tiny risk of clots was judged to be greatly outweighed by the consequences of contracting COVID-19.

A little later AstraZenica started to become the clear second choice to Pfizer for almost anyone with an option, with further confusion resulting from the recommended interval between the two shots. Oxford University, where it was developed, decided 6-8 weeks should be safe. While the recommended 12-week interval still officially applies, the view now is that it’s better to be almost-fully-immunised quicker than to wait to term and risk getting the disease. There’s also been discussion about whether a third dose might be necessary, perhaps of AstraZenica, although it might be better to make this a Pfizer (assuming stock is available).

One thing is clear – it shouldn’t be up to the patient to decide. 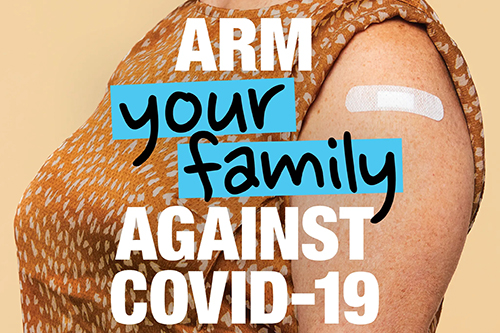 In short, the messaging - fuelled by the hostility between the states and Canberra - has been spectacularly awry, not helped by an advertising campaign that was slow to get going because of a shortage of vaccine supply. When it did, in early July as winter’s danger zone was peaking, many critics said it was far less effective than it should be.

The government’s national ‘Arm Yourself’ campaign, a.k.a. the BandAid campaign, “provides little information beyond a metaphoric battle slogan,” said a team of marketers from RMIT in The Conversation, adding it was like something out of the satirical ABC television show Utopia: “Its primary call to action is to visit a website… It lacks the powerful imagery, stirring music or relatable characters to engage the audience.”

Professor John Dwyer, Emeritus Professor of Medicine at UNSW and the founder of the Australian Healthcare Reform Alliance, addressed the more graphic side of the campaign, a television commercial showing a COVID-19 patient in an ICU bed, writing “The current appalling attempt by the federal government to shock Australians into getting vaccinated by showing them a young woman struggling to breathe with just nasal prongs delivering oxygen is rightly much criticised.

“For those of us that lived through the error ridden ‘Grim Reaper’ AIDS shocker in the 80s, this latest effort shows we have learnt little about infomercials that are accurate and empowering.”

Vaccination ads from places as diverse as the UK and Cambodia, the USA and Indonesia, have taken a variety of approaches, most of them explanatory, in pictures or words, or both, and few if any have featured images of ‘jabs’ or post-jabbing, i.e. BandAids.

In addition, most of the campaigns are underpinned by governments’ having adequate vaccine supply and the ability to test for COVID-19 without people, many taking time off work, queuing for up to eight hours.

The coronavirus experience may well have helped enhance Australians’ health literacy, and if so, that’s a positive. The importance of consumer health literacy, a little-understood concept at the time, although seemingly self-evident, was identified back when Nicola Rixon was health minister. It seemed to be somewhat buried in the heat that surrounded the debate over cigarette pack warnings. The need for both has now become well accepted.

Alternatively, it may only have deepened our scepticism about government’s ability to manage crises, in which case the next, inevitable one will present even greater problems. Either way, the subject will undoubtedly be a focus for many a research project in the time ahead.