Flow - An ancient tale of water told in a contemporary way 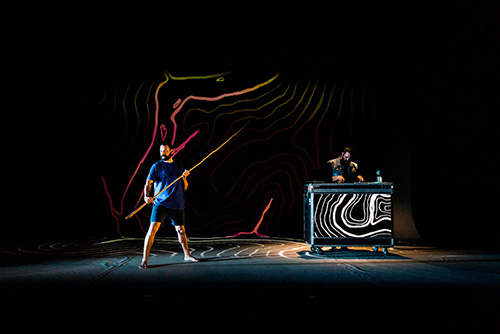 It’s exciting to know that the NORPA crew are already looking at ways to expand its audience by offering this local production to festivals and creating a version to be played at schools.

While onstage theatregoers see only two Yaegl men – Mitch King and Blake Rhodes – Flow has been a major collaboration involving an impressive creative team and valued input gathered from Elders during a week-long stay on Yaegl Country earlier this year. The Yaegl People are the traditional custodians of the coastal areas around Yamba, Iluka and Maclean, having lived there for 60,000 years. Yaegl country covers a relatively small area due to plentiful resources both from the ocean and the Clarence River.

Told through contemporary dance, poetry, visual imagery and rap, Flow is a new dreaming, strengthening respect for Eldership and engaging young people in the living traditions held in local ancestral stories. Flow is a tale of searching and finding identity in music, urban culture and nature, an ancient story acknowledging how and why water flows through this region and its cultural significance.

“Hearing Yaegl language as we learn a very ancient and sacred story of protection and healing, deepens our understanding and care of this magnificent region.”

Mitch and Blake are new to the theatre form but have a background in hip hop music and dance. The production grew out of Mitch’s 2018 spoken word performance about the Yaegl Native Title Determination Day. Mitch said the show for him was always going to be about water.

“Gaining the water rights created foundations for this and for a lot of other things in that community and I thought ‘what are the connections here, what’s the thread?’ And it’s actually the weaving, so many people set up the show that they loved how all the various water themes were woven in so effortlessly.

“The child character, the teenage character and the uncle character, there was always this connection through water and even for myself. My own part of the story, my daughter’s school project … in parallel we’re doing our own discovery of Yaegl country and it all relates to the rivers. It shows how important that beautiful river is to us and how it’s actually within us, it’s connected to us quite strongly and you can hear it in the voices on stage and the way I embody it throughout the performance,” said Mitch.

For composer and performer Blake Rhodes working on Flow and spending time with the Elders has been one of the best things he’s done.

“We spent a week with Elders in Woody Heads working on Flow the whole time. We ate together and they shared stories and we got to show them the performance that we’d put together at the end of last year. That had been taped and we got their feedback. It’s been a very back and forth conversation with them since the beginning. And to have their faces in the show as well is very uplifting.”

For Mitch, Flow is all about sharing the Yaegl culture.

“It is still there and we need to amplify those voices that hold that knowledge and keep it going. It’s a new way of story-telling. It’s the really ancient coming together with the very contemporary and you can feel the depth of culture throughout the show.

“We have to realise how special and precious our waterways are and we need to take care of these spaces so we can leave them for future generations to take care of.”

Mitch said many Elders who came to the show had never been to the theatre and it was very gratifying to see them there. A lot came back for a second night.

“Both my Nans came. My mother was saying they were like little school kids who didn’t want to leave. They wanted to hang out and keep talking. It was an incredible gathering and I want to keep doing that, creating these opportunities for our Mob to come and have fun and enjoy themselves and yarn before and after the show.”

Mitch and Blake also work together at Rekindling the Spirit, running a program called Dream Bigger. It’s a creative and performance art program for young people, sharing stories through dance, music or another medium.

“It’s about creating a positive space in which the young person can connect. It might be as simple as having a chat and finding out what they’d like to do in their lives. It’s similar to when we practise deep listening and talk to Elders,” Mitch explained.

“And when we listen to the old people, asking ‘What is Uncle Warren telling me?’ The Elders sometimes don’t talk directly, sometimes you have to sit with the yarn and be present with it and come to an understanding of it. So I’m listening to the Elders and the young people are listening to me. Each has a destination, the train getting from A to B. We all have our mentors and our old people we draw on for wisdom. I don’t think I’m a wise person, I just want to be a positive presence in these young people’s lives and give them the opportunity to have a real conversation.”

Blake and Mitch are excited that Flow will continue to run.

“Flow has a much longer lifespan than four shows and it will continue to evolve as well. We are always trying to constantly improve it and add to it. I do think kids in schools would love to see it,” said Blake.