Between May-July this year the NSW Agency for Clinical Innovation ran a crowdsourcing challenge, inclusive of a Twitter chat, to gain insights and perspectives from clinicians, managers and consumers to contribute towards an action plan to tackle unwarranted clinical variation in NSW. 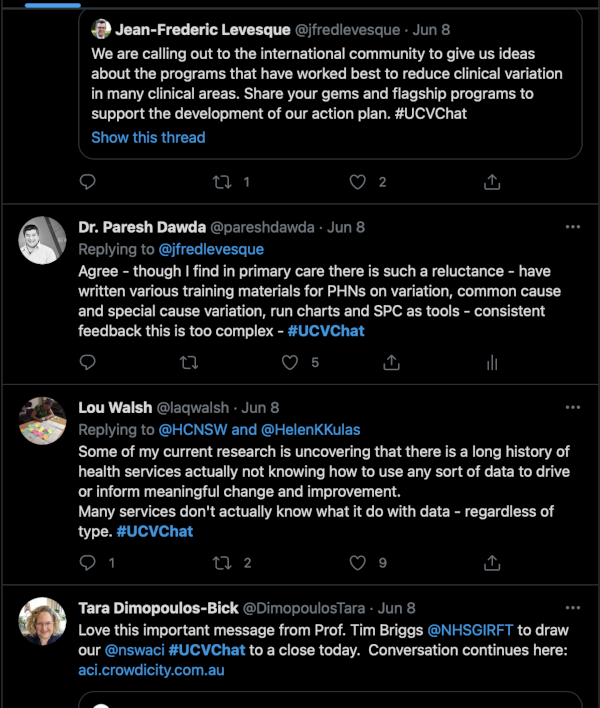 It was a tweet on this feed that led to an invitation to author this article in which I discuss the background of clinical variation in health care with a focus on primary care, the Australian experience of identifying, understanding and managing variation, followed by strategies to address variation.

Variation in healthcare is not a new phenomenon. For example, a 1930s review of tonsillectomies across London boroughs found a 20-fold variation, leading to the conclusion that there was a ‘tendency for the operation to be performed as a routine prophylactic ritual for no particular reason and with no particular result’. A troublesome conclusion, particularly because at that time tonsillectomy operations led to the death of seven children every month in England.

Now, almost a century later, we continue to observe wide variations in clinical practice that cannot be explained by patient preference or illness severity. These variations are unwarranted.  There are three types of unwarranted variation:

Variations in effective care and patient safety are variations in care for which effectiveness has been demonstrated in multiple pieces of well designed research and whose use does not involve substantial trade-offs that depend on patient preferences. The CareTrack study explored the appropriateness of health care delivery in Australia across 22 conditions and found appropriate care was delivered on average 57% of the time. Whilst the study caused considerable debate at the time about the headline figure, more importantly healthcare providers in the study showed a variation of between 32-86%. Some were able to deliver appropriate care more often and others were not. The big question is, why?

Variation in preference-sensitive care describes conditions where two or more medically acceptable options exist, and the choice therefore should depend on patient preferences. An example may include treatment of early-stage prostate cancer.

Variation in supply-sensitive care reflects a complex phenomenon in which variation is correlated with the supply of health care services and in the absence of medical evidence and clinical theory. At its simplest, it occurs because there is a greater supply of a particular service than the need. Consider procedures such as knee arthroscopy, endoscopy and angiography as examples.

Australia’s journey in exploring variation in healthcare is young. The first Australian Atlas of Variation was published in 2015 and since then there have been another three published. Themes explored in the atlases have included surgery, medications, investigations, maternity and women’s health, hospitalisations and chronic diseases.

A specific theme on variation on antibiotic dispensing showed Australia dispensed more than twice as many antibiotics as other countries like Sweden. Identifying that the volume of scripts prescribed by GPs was a significant contributor to Australia’s antibiotic dispensing rates the Australian Government successfully undertook a trial of a behavioural economics approach to change GP prescribing behaviour. GPs who were in the top 30% of antibiotics prescribers were sent one of four different letters:

The trial found that a peer comparison letter with a graph performed best and led to just over a 12% reduction in prescribing.

Building on this success the Department of Health has sought to use a similarly targeted letter approach to tackle variation in a range of areas such as opioid prescribing and billing practices. These ‘nudge campaigns’ have been somewhat more controversial and an independent review found them to be only partially effective, although there is other evidence supporting the ongoing use of nudge approaches provided they are subject to evaluation.

Based on these observations we can hypothesise that the near future will continue to have an emphasis on reducing unwarranted variation in healthcare, including primary health care. Much of the activity in primary care to date has focused on the individual clinician and has taken a judgmental paradigm.

I would argue that this paradigm needs to change and shift to one which has an improvement (and non-judgemental) focus and one which facilitates a bottom-up approach rather than the top-down approach that we have experienced to date. More importantly, an individual’s contribution to unwarranted variations is often relatively small and the unwarranted variation is determined to a much greater extent by the system those individuals work in.

The causes of variation are complex and multidimensional as shown in the diagram below reproduced from a paper by the King’s Fund in the UK. 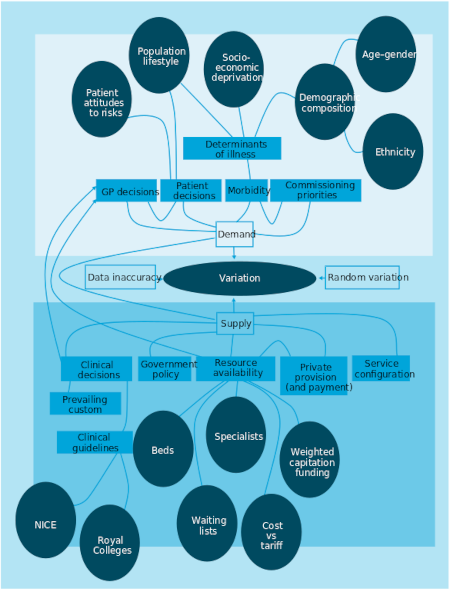 The solution to address these causes therefore needs to be multidimensional. Importantly, I believe that health services including general practices need to proactively engage in understanding their own variation and that of the clinicians within their practice. The first step to addressing variation therefore is clinical leadership at the practice level. Research has shown that high performing healthcare organisations deliberately design their clinical microsystems. That is, they identify populations and subpopulations with similar needs and have noticeably clearer structures, processes, and procedures of how care is delivered for that subpopulation.

If we accept that we need to address clinical variation, then we need our clinical information systems to be much more sophisticated, with reporting engines that can provide reports so we can ask meaningful questions of the data and then analyse that data to answer those meaningful questions. This requires a learning culture philosophy and application of a quality improvement paradigm.

At a practice level when variation is found the next step is to understand the reasons for the variation. An extremely useful way to do this is to use a root cause analysis approach. That is to ask the question ‘why?’ five times. Doing so in an inclusive way helps the whole team to undertake diagnostics to understand the causes of variation.

The role of patients is paramount. How patients are brought into the equation when addressing variation needs to be encouraged and further considered. A review by the Sax Institute in NSW found a lack of recognition of the contribution that patient preferences and factors make to clinical variation in healthcare. The role of the patient and the utilisation of shared decision-making guides and aids are fundamental to reducing unwanted variation, particularly preference-sensitive variation.

Ultimately, variation is about quality. One of my favorite quotes is from Edward Deming, one of the founders of the quality improvement movement in the post-World War II period. Deming noted that, “uncontrolled variation is the enemy of quality” and “understanding variation is the key to success in quality and business”.

As clinicians and managers working in primary care, I believe we want to provide the best quality care we can for our patients. To provide optimal quality we need to embrace the concepts of understanding and improving unwarranted variation.