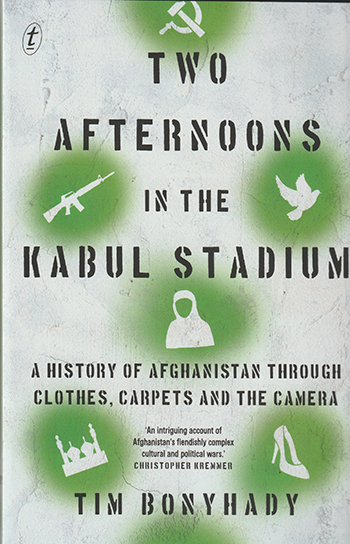 Four decades and several regimes later, the stadium was the venue for the Taliban’s execution of a chadori (‘burqa’) clad woman named Zarmeena, alleged to have killed her husband: “The policewomen had Zarmeena sit on the penalty line, she turned towards the man with the Kalashnikov, then turned away and the man shot her in the back of the head.”
The shocking event was filmed secretly by one of the women in the audience, all of them covered head to toe, through the veil of her chadori. It was circulated widely, including overseas, causing predictable outrage and a warning of what was to come.
The timespan between these events marks what the author, an ANU academic and acclaimed writer, calls “a momentous era in Afghanistan ruptured by a sequence of cataclysmic events and decisions in Kabul, Moscow and Washington in 1979 – a year of exceptional global significance, shaping the world into this century.”
This was when the Soviets sent troops into the ‘graveyard of empires’, manipulating and in some cases killing its leadership, and sparking the Mujahadin fightback. In a classic Cold War response the USA began shipping arms through Pakistan for the Islamist resistance, a ratbaggery alliance, which eventually seized power and played host to Bin Laden and the Twin Towers plotters. So began the engagement of America (and Australia) that is only now ending.
Enter the third ‘C’ of carpets, the war rugs showing images of military equipment ranging from the ubiquitous Kalashnikov AK-47 to tanks, helicopters, aircraft. The book’s author is an authority on these remarkable memorabilia, as the accompanying article describes. Tim Bonyhady launched his book in early August in the Drill Hall Gallery at ANU’s main Canberra campus surrounded by the rugs he has collected over four decades of the Afghanistan conflict.
A fortnight later the Taliban completed their takeover of Afghanistan by rolling into Kabul almost unopposed. The timing of this excellent book is fortuitous for the author but less so for a country entering another phase in what seems like an endless war. The rug makers of Afghanistan will have no shortage of subject matter in the time ahead.