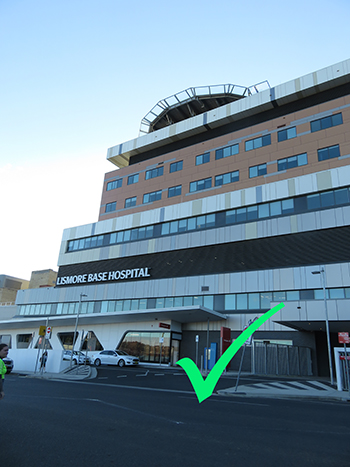 Being admitted to hospital is rarely an activity of choice but it’s good to know that your experience is likely to be as bearable as possible. No doubt to the great relief of hospital administrators, not to say patients themselves, the most recently captured feedback on hospitals run by Northern NSW Local Health District (NNSWLHD) is exceptionally positive, according to the latest Adult Admitted Patient Survey from the Bureau of Health Information.

The 2020 survey canvassed patients’ views of the care they received and the apparent cleanliness of the facilities. Almost all (97 per cent) described their care as ‘very good’ or ‘good’ – a two percentage point increase on the previous year  – with 96 per cent saying the same about the doctors who treated them. Nurses fared one percentage point better, the survey showed.

For the third year running, Byron Central Hospital, opened in mid-2016, received the highest individual hospital result in the state, with 92 per cent of patients saying the wards or rooms were ‘very clean’, and 98 per cent rating the nurses as ‘very good’ or ‘good’. This dropped to 90 per cent regarding Byron’s doctors.

Down the track in Ballina, 98 per cent of patients said BDH’s Emergency Department staff were ‘always’ polite and courteous, 97 per cent said the nurses who treated them were ‘very good’ or ‘good’, and 96 per cent said the same about local doctors.

Lismore and Grafton Base Hospitals rated almost as highly, dropping only to 90 per cent in giving a ‘very clean’ rating to LBH’s wards and bathrooms.

Maclean and Murwillumbah District Hospitals also got the thumbs-up with even the lowest score  – 86 per cent of patients in the latter facility rating overall care as ‘very good’  – being well above the NSW average of 71 per cent.

Up in Tweed, pictured on this issue’s front cover, 98 per cent of patients said the rooms and wards were ‘clean’ or ‘very clean’, rating their care highly and being very positive about doctors and nurses.

NNSWLHD Chief Executive Wayne Jones praised the dedicated health staff in Northern NSW for their continued professionalism and care: ‘We all know 2020 was a tough year, coming off the back of local bushfires and flooding. Despite the added pressures, our amazing clinicians and hospital staff continued giving exemplary care,’ he said.

‘Once again, the survey showed almost all Northern NSW hospitals were well above the state average in cleanliness, with 85 per cent of patients across NNSWLHD saying the wards or rooms were ‘very clean’, the highest result across all LHDs in the state.’