Non-melanoma and Melanoma Skin Cancers in Surfers and swimmers 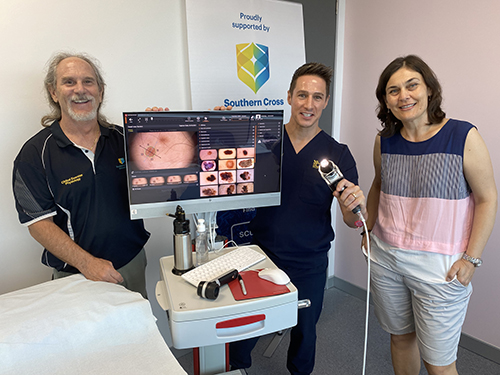 Melanoma is often referred to as “Australia’s national cancer”, with the nation  recognised as having the highest incidence of non-melanoma and melanoma skin cancer in the world. One in three Australians are diagnosed with skin cancer by the age of 70, and those residing in Northern NSW and Queensland face the highest risk of developing melanoma.

Surfing and swimming are two popular recreational activities in Australia, with an estimated 2.7 million surfers and three million swimmers nationwide. These activities are associated with prolonged intermittent exposure to ultraviolet radiation (UVR), which is recognised as a causal mechanism in the development of pre-cancerous skin cancers (actinic keratosis), non-melanoma  (basal cell carcinoma, squamous cell carcinoma, and squamous cell carcinoma in situ) and melanoma skin cancer.

Southern Cross University's Aquatic Based Research Unit recently completed the first in its  series of studies on skin cancer in aquatic enthusiasts. We conducted whole-body skin checks on surfers and swimmers in South-East Queensland and Northern NSW and found despite very high usage of chemical or physical sun protection strategies (100% and 92%, respectively) that 50% of the surfers and 27% of the swimmers were identified with at least a single skin cancer.

Melanomas were primarily found on the face (33%) and back (33%). Additionally, the standardised rate (per 100,000) of melanoma skin cancer was estimated to be 5,172 for surfers and 1,818 for swimmers, which is significantly higher than the standardised rate for the general Australian population (53.5 per 100,000).  We also investigated UVR exposure during aquatic activity and found that the highest quartile of exposure (> 10,00 lifetime hours of surfing or swimming) was associated with significantly more individuals being identified with skin cancer and a greater number of skin cancers.

These findings highlight the clinical importance of regular screening in surfers and swimmers for early detection and treatment of skin cancer for improved health outcomes. Hence, our vision is to help prevent skin cancer through early diagnosis, especially in groups with an increased risk of developing melanoma.

Our next study includes whole-body skin checks for early skin cancer detection with the aid of high-resolution digital dermoscopy enabling mole mapping and comparison, powered by artificial intelligence. This allows the clinician to document the entire skin and individual moles over time and detect pathological changes as early as possible to help improve skin cancer detection.

Finally, to extend our research further, we will look for industry partners to support the development of clinical biomarkers associated with the early detection and timely prevention of skin cancer.

If you are interested in becoming an industry partner or finding out more, contact Associate Professor Mike Climstein on 07 5589 3330 or This email address is being protected from spambots. You need JavaScript enabled to view it.