It’s not always the chicken 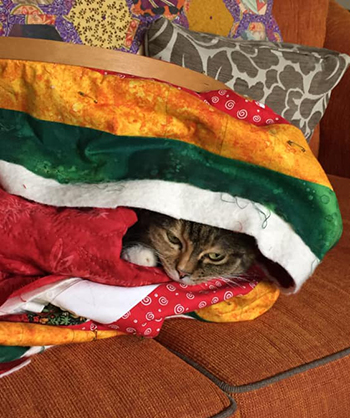 A casual chat with a client about her sick mum at the vet clinic recently revealed a little pearl which led me to diagnose her mum’s cat’s illness and taught me a lesson about how I could improve my history-taking skills.

The client, in her late fifties, was describing how she had been busy caring for her elderly mother who had become disoriented and collapsed at home with acute severe diarrhoea and vomiting. She was stabilised in Emergency and admitted to hospital, testing positive for both E.coli and Campylobacter jejuni. She responded rapidly to antibiotics and fluid therapy.

My ears pricked up at ‘C.jejuni’ and I mentioned that C.jejuni can be zoonotically transmitted.

I then asked my client whether her mother had any pets. She replied that she had a cat named Etta, which was quite well despite being underweight, vomiting regularly, and having had unformed and occasionally bloody stools for the last 18 months.

The cat toileted in a litter tray in the house that her mother would have handled for cleaning daily, not to mention petting the cat. You will remember that cats (and dogs for that matter) are fastidious groomers and clean their back ends with their front ends!

The cat returned positive PCR results for Clostridium A (not uncommon in asymptomatic cats) and Campylobacter jejuni.

Infections with Campylobacter species are a leading cause of acute bacterial gastroenteritis (in humans) in industrialised countries, with Australia experiencing higher rates of illness than many comparable high-income countries.

A 2020 epidemiological survey of reported Campylobacteriosis cases in Australia from 2001 to 2016. Of 84 outbreaks, 61 per cent were classified as foodborne and of these 85 per cent involved chicken.

One quarter of outbreaks occurred in aged-care facilities. In 27 per cent of cases a source of infection was not identified.

All things considered, Etta was more than likely the reservoir and source of her owner’s infection, especially considering the potential lapses in personal hygiene protocols that would accompany early dementia in an elderly person living alone with only partial support.

Etta was placed on a prescription diet high in pre and pro biotics and given a broad spectrum anthelmintic, whilst we waited for stock of suitable formulation of azithromycin.

Interestingly, the stool quality improved immediately and markedly just with the diet change and de-worming and continued to improve and resolve to normal once the azithromycin course of five days was completed. Etta has since gained weight and been well as has been the case for her owner. However, she has been re-homed to prevent any further infection.

This anecdotal report could serve as a reminder that with campylobacter gastro, ‘It’s not always the chicken’ and just as my own clinical history-taking skills could be sharpened by including questions about a pet owner’s current and recent health problems, medical professionals might be well served to include questions about the current and recent health of household pets, especially with older patients and children.

Of course, pets as asymptomatic reservoirs of zoonotic infection should also be considered.

Mike Fitzgerald is a veterinarian in the Northern Rivers.