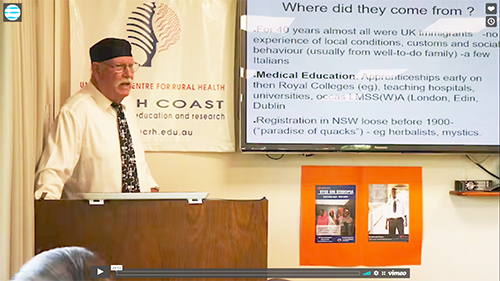 Dr Neil Thompson, Lismore's first orthopaedic surgeon, passed away peacefully in Byron Bay with his wife Elaine and his children by his side. Neil was a devoted and respected doctor in Lismore for more than 25 years, serving this community and surrounds with great skill, care and compassion.

Neil's opus magnum in retirement was his book, Sawbones, Saddle Burns & Soothing Balms: Medical Practitioners in the Richmond Valley, 1866–1986, a valuable history of the local medical fraternity from 1866 to 1986.

Normag editor, Robin Osborne reviewed the book in February 2015. The launch at the Alstonville Historical Society was attended by hundreds of his friends, acquaintances and colleagues. At the 2019 Nordocs Unconference Neil recounted tales of some of our more colourful predecessors. (Default nordocs password)

The following is the Forward to the book.

Neil Thompson was born and bred in Bondi, son of a schoolteacher and a WWII Bombardier who served in New Guinea. He graduated from Sydney University Medical School in 1965, having had many long-vacation jobs — ranging from loading goods trains at Central Railway Station to working as a groundsman at Sydney University Oval and painting the fence and toilets. His main recreations were club cricket with Waverley and Sydney Uni for many years, and tennis.

After hospital resident years, he went to England for four and a half years’ training in surgery, and settled into orthopaedics after working in six large hospitals and being influenced by some very fine surgeons and teachers.

Neil completed his training in Sydney, then worked in the outer western suburbs before formally responding to the need for a resident orthopaedic surgeon in Lismore in 1976, and settling there with his English (Suffolk-born) wife and three young children. From the outset, he found great scope for his particular interests of trauma injuries and paediatric conditions.

He managed to negotiate the medical mill before spending twenty five years in solo consultancy practice in the Richmond Valley, meeting many doctors in the area and thereby being able to observe medical proceedings from the inside.

Neil is greatly missed by the many colleagues who knew and admired him, but his book is fine testimony to his dedication to the medical community in our region.