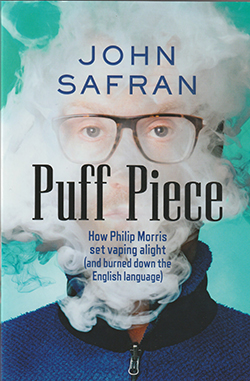 In journalism a ‘puff piece’ is a weightless story praising a person or business and ignoring, or even covering up, any flaws they may possess. While John Safran’s latest book certainly focuses on a brand name – the words Philip Morris appear on almost every page  – the result is anything but an enhancement of the cigarette manufacturer’s reputation.

As he makes this clear from the outset, the company’s history of deceit is long and harmful, the latest example being its response to the European Parliament’s ban in May 2020 of menthol cigarettes.

Philip Morris agreed to stop the product’s sale but announced a substitute: ‘It’s not a menthol cigarette, they assure everyone. It’s a menthol HeatStick. But a HeatStick is just tobacco rolled in paper with a filter at one end. You know, like a cigarette.’

This non-cigarette, now being marketed well beyond the menthol ban phase, is activated by a device called an IQOS (pronounced ‘eye kose’) that heats the tobacco to a high temperature to release what the company denies is smoke, without actually burning, enabling the not-smoker to draw nicotine and tobacco, plus cancer-causing tar, into the lungs.

The lack of combustion is the basis of the company’s claim that they are not producing a cigarette.

The book’s tone is darkly humorous and unrelentingly angry with a company that has killed millions around the world while buying its way out of and around every legal attempt to stop it. The IQOS is its latest play, coming at a time when anti-smoking pressures are peaking and, as luck would have it, another ‘healthy’ smoking device is sweeping the world, or at least the West.

Enter the e-cigarette, a battery-operated device that heats a liquid to produce a vapour that users inhale. Hence the term ‘vaping’. The fluid in these devices can be bought in a myriad of flavours. What can’t be bought, as of 1 October this year, is liquid nicotine, which has been banned for importation or sale in Australia without a prescription relating to smoking cessation.

In its latest cynical, massively funded strategy Philip Morris is riding the slipstream of the vaping movement by seeking to portray the IQOS as a parallel healthy alternative to smoking. As Safran reveals, they have even helped fund the vaping movement’s lobbying activities and legal actions.

The pitch is that the device doesn’t generate smoke, but aerosol, and while your lungs are indeed drawing in nicotine and tobacco, this aerosol means ‘the levels of harmful chemicals are significantly reduced compared to cigarette smoke’ (the company claims).

It’s ‘sleek, blue and metallic-looking, roughly the length of a cigarette… like a pen an astronaut would have… it slides into a matching charging device… and the whole package fits into your hand. If I saw a woman holding one on a red carpet I’d assume it’s some sort of compact or tampon case that I’m unfamiliar with because I don’t read Vogue.’

This is a whip-smart book, laugh out loud funny despite being bleakly infuriating.

‘I began this book assuming people would be enraged by Philip Morris… The word ‘corporations’ once took top spot… But, using my Twitter feed and left-leaning news outlets as a barometer, the word ‘whiteness’ has substituted in… Philip Morris, the lucky buggers, are the beneficiaries of a cultural shift. Judging eyes have drifted away from the corporations, the very same moment they’re sending the IQOS into the world.’

Some 21,000 Australians die prematurely each year from smoking cigarettes, often from cancer, and as Safran says, people hate the product as a result. They should also hate the tobacco companies, especially Philip Morris because of its subterfuge claim that HeatSticks do not produce smoke.

As Safran comes to realise, he was blinded all along by the smoke screen (which might have been a better title): ‘I realise the precise truth is that what makes cigarettes so harmful is the tar in the smoke they produce… I’ve been wild-goose chasing smoke this whole time… I should have been chasing tar… the deal maker or breaker is not ‘Does the HeatStick produce smoke?’ It’s ‘Does the HeatStick produce tar?’

The answer is ‘yes’, as Philip Morris, a.k.a. the ‘Marlboro cowboys’, admit but try to conceal when releasing the product’s ingredient list to the American FDA: ‘all but one constituent is given their ordinary name… Carbon monoxide is carbon monoxide, mercury is mercury. Only tar is scrubbed out, reworded as ‘NFDPM’ – Nicotine Free Dry Particulate Matter.’

The company admits, without shame, that  the HeatStick produces 78 per cent of the tar produced by a cigarette. This, having lost a case arguing that ‘low tar’ cigarettes are a healthier option for smokers.

Will the claim that this unattractively named device is preferable to cigarettes enable the device to be sold here, as it is in Europe, Japan and elsewhere?

One hopes not, Your Honour.