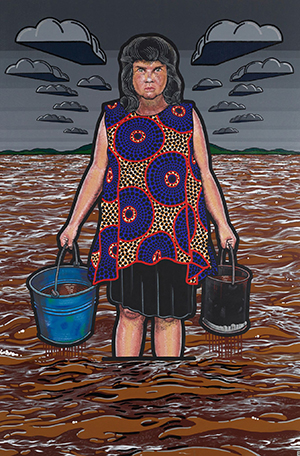 More accustomed to being the creator of artworks than the subject, Wiradjuri artist Karla Dickens, who lives on Bundjalung Country in Lismore, has helped Blak Douglas, a Sydney-based artist with Dhungatti heritage, win the 2022 Archibald Prize.

The painting is a metaphor for the disastrous floods that hit northern NSW in February/March.

‘Spiritually, we all know that Mother Earth is angry at us,’ says Blak Douglas about a portrait whose title references the 1851 novel Moby Dick, by Herman Melville.

The artist often uses flat-bottomed clouds as a symbol in his work, representing what he calls the ‘false ceiling of government’. There are 14 of them in this painting, indicating the number of days and nights that the first deluge lasted.

The story of Noah’s Ark comes to mind,’ says Douglas. ‘One would think that a devoutly religious prime minister might take significantly more note of the community’s desperate call for assistance.’

He says that the leaking buckets in the portrait serve as a cryptic acknowledgement of the commissions that many commercial galleries take on artworks sold, which range from 10 to 50 per cent: ‘The rising muddied waters are a symbol of the artist’s position within the art world – trepidatious, unchartered and ominous.’

This is the fifth time Douglas has been selected as a finalist in the prestigious Archibald competition.
In late 2022, an artwork by Karla Dickens will be installed above the entrance of the Art Gallery’s historic building, as one of the major commissions for the Sydney Modern Project.

In February 2021 the magazine published a story on Karla Dickens’ exhibition A Dickensian Sideshow at Lismore Regional Gallery.

Karla Dickens, a Wiradjuri artist who lives and works on Bundjalung Country in Lismore, is one of nine artists who have been commissioned to produce a site-specific work as part of the Sydney Modern Project at the Art Gallery of New South Wales. Her commissioned work, a panel depicting hooded figures, is a powerful consideration of the continuing legacies of colonialism and patriarchy. It will be installed in the niche above the front door of the Art Gallery’s historic building later this year.