After the floods… some good news about gallery’s artworks 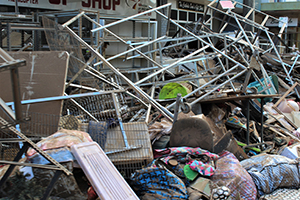 Nine weeks after the catastrophic February flooding of Lismore and the second flood a month later Lismore Regional Gallery Director Ashleigh Ralph describes the last few months as a roller coaster.
These terrible events happened when Ashleigh was just eight months into the job.
Four days after the flood, Gallery staff were able to enter the building and survey the damage. The entire two-storey building was inundated by a tsunami of river water and debris. It was a very emotional time for team members who’d worked at the Gallery for many years.
‘The whole Gallery was flooded, including the exhibitions, the permanent collection, the Hannah Cabinet, everything. We had a flood mitigation plan, but this flood went above and beyond what anyone could have anticipated or planned for,’ Ashleigh said.

The recovery effort involved more than 400 volunteers over ten days supporting staff to clean out the gallery.
‘People who had never come to the gallery before were there helping out. Sadly, the same effort wasn’t afforded after the second flood. It was pretty devastating. Now the building is being slowly cleaned out by engineers and hygienists. They are taking out the walls and ceilings and then we wait to engage a building company to rebuild the gallery as it was, with some improvements.’
But there are some good news stories. Remarkably, the iconic Hannah Cabinet (worth $1.5m) is able to be restored despite being inundated with water.
‘It will take a couple of years, first it’s gone to conservators in Canberra. After they have completed their work, it comes back to its creator Geoff Hannah to make the final touches,’ Ashleigh explained.
The Gallery’s permanent collection went up to Brisbane for sorting and assessment and the works are being shipped to Sydney for conservation and restoration. The other exhibition works are still being evaluated and the Gallery is working with the artists and the insurance company to determine what happens next.
‘Fortunately, the Afghan war rugs that were on exhibition have had a pretty quick turnaround because of the nature of the fabric. They can be washed, and the conservators have worked on those. Overall, they’ll be okay with only minor permanent damage.’
The Gallery staff are being housed temporarily in the GSAC building in Goonellabah. Ashleigh said the team is coming back together after a lot of people went on leave, and the Gallery is still engaging with the community. Currently a Collage Club is being run every Thursday afternoon in The Quad, adjacent to the Gallery.
‘People love to come and get lost in the process of collage, it’s pretty cathartic I think. We’re also hosting music in the Quad and we’re planning a few key events over the next six months. I’m also busy working with the curators of the Gallery to produce off-site or pop-up exhibitions.’ 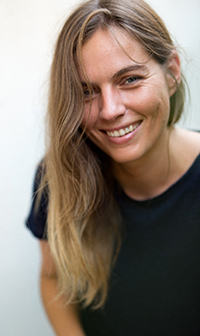 When Ashleigh was appointed as Lismore Regional Gallery Director last June, the then Mayor Vanessa Ekins described her as the ‘stand out choice’ among many applicants.
For Ashleigh, whose previous position was Assistant Director in Development and Operations at the Institute of Modern Art (IMA) in Brisbane, says it was the natural next step in her career.
“I’d been looking to live down in this area and had my eye on Lismore Regional Gallery, and I thought ‘that’s where I want to work.’ Months later, the position came up, so I put my hat in the ring.
Ashleigh grew up in Brisbane, attaining a Bachelor of Arts, majoring in Art History with First Class Honours from the University of Queensland. She has worked in that city in a range of arts settings.
Before working at IMA, Ashleigh founded and directed Innerspace Contemporary Art, was Assistant Curator at UAP and worked in museums and not for profit organisations. Ashleigh told NorDocs that she appreciates Lismore’s diverse community and vibrancy.
“The history of Lismore is interesting, and I am fascinated by the stories of why people moved here. Some many artists and creatives land here, and the Bundjalung .”
As well as setting her intention to work in Lismore, Ashleigh says she is motivated to make a difference in the arts. She knew early on that she wanted to manage an art space and work in the regions.
“I made a lot of good connections through my various positions when I was in Brisbane. I was part of an artist-run initiative, CORFLUTE with university friends. I also ran a commercial roaming art space, Innerspace Contemporary Art. I’ve always been passionate about supporting emerging artists to take that next step in their career.”
Ashleigh enjoys support from both family and friends.
“My mum is a writer and has always encouraged me to follow my passion. She was always getting me to draw and express myself creatively. I’m grateful for my upbringing in that way. I also have a strong support network in Brisbane, and they are only a stone’s throw away.”
While taking on a new role and directing the Gallery during a pandemic, and then dealing with the disastrous floods has been extremely challenging, Ashleigh is looking forwards with optimism.
Despite these major setbacks she still intends to continue to bring cutting edge art to the region, alongside the work of local creatives. Although of course the recovery and rebuilding process will take some time.