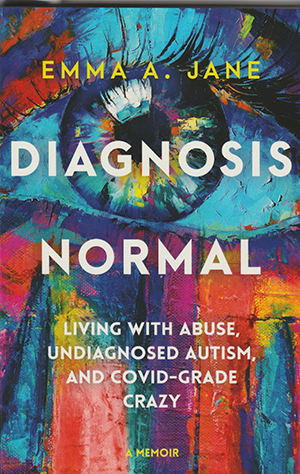 Of the many entertaining, shocking and insightful words in Dr Emma A. Jane’s remarkable memoir this short sentence aptly summarises the author’s situation: ‘My mind is never quiet.’

Emma Tom, as she then was, worked as a journalist at The Northern Star in Lismore in what seems a halcyon era before the Murdoch organisation shut down its regional newspapers. Despite trepidations, she learned the trade well before moving to Sydney and into the big league, joining The Sydney Morning Herald and gaining a reputation for fearlessly undertaking quirky, often daring, assignments.

Many journalistic insider tales were not reported on, as when colleagues drank flaming sambucas, not realising they should be extinguished before the shots could be slammed: “At one point, I looked around and everyone was either burned or burning,’ Jane recounts.

‘Several people required hospital treatment and the elderly wife of a senior staffer went home with a broken nose. Not because of the sambuca slammers but because an editor had head-banged too hard to the house band.’

Later she was poached by The Australian after a meeting at the Murdoch family mansion where Lachlan, a motorbike fan, was impressed when the author arrived wearing leathers on a 245cc yellow Yamaha.

Her first column featured a lavish lunch with One Nation co-founder David Oldfield. The striking, pint-sized blonde – typecast in that way – moved on to a succession of controversial topics, including a bondage school, ‘road testing’ a male gigolo and being tattooed by a former circus freak. As she makes clear, and an accompanying photo proves, most of her ‘bodily real estate’ is now marked with tattoos and piercings.

In her other life she played guitar in a punk band and revelled in an active, unconventional sex life. That and more was the Emma Tom the world came to know about and gasp over. Less known, except to close friends, was the story of the young girl who had been sexually abused for years by a close male friend of her family on the north coast. A man who, typically, threatened her with dire consequences if she breathed a word about what he was doing.

As she discusses at length, framed within a context of female objectification and power imbalance, her early life experiences even encouraged her to change her name, hoping that expunging the past – her abuser, even her family – would enable her to reinvent.

‘I wanted a family name more representative of the people with whom I shared actual familial bonds. Also, ‘Emma Jane Tom’ was the broken girl who’d been sexually abused. ‘Emma Alice Jane’ was the grown-up person emerging from the wreckage.’

This ‘new’ person, still highly unconventional, is the mother of a teenage girl, a successful academic with a PhD, the author of a number of books, including this deeply personal one, a cancer survivor and, not least because of her background, a thoughtful analyst of the impacts of child sexual abuse, ‘conveniently abbreviated to CSA’.

‘Academic jargon bears little similarities to real-world experience. It’s how we’re expected to write and is sometimes necessary for precision, but it sanitises and distances… Here then, is my best shot at explaining in plain English what the research says about the impacts… of CSA on the average human.

‘Short version: child sexual abuse can affect all aspects of a person’s life for their entire life. This includes mental and physical health, interpersonal relationships, identity, and socio-economic wellbeing. Some problems are apparent immediately while others – potent ‘sleeper effects’ – emerge over time.

‘Further, it can kill you.’

The longer version takes up more than a page, ranging across self-harm and mutilation, PTSD, school and sleeping issues, and ‘socially inappropriate behaviour’. Considering whether child abuse caused her cancer, she answers no, but says it would equally be wrong to conclude the two aren’t potentially connected.

She adds, ‘One of the most common outcomes of trauma is avoidance, and medical settings are triggering. As a result, people in the direst need of professional help may avoid seeking it – presuming, of course, that risky behaviour hasn’t derailed their lives to the extent that such help is even affordable.’

She notes that an unexpected discovery about surviving ‘Carcinomaville’ is that ‘while you might not be dead, you might never again be well. In my case, the collateral damage caused by treatment was substantial. Some of it will be permanent.’

The residuals include a ravaged immune system, extensive bodily warts, chronic neuralgia, lymphoedema and of course the psychological impacts, not helped by her autism and ADHD.

This is a wild ride through contemporary sexuality, journalism and academia, gender discrimination and sexual abuse, parenthood and significant illness. While no doubt a useful catharsis for the author this memoir, sub-titled ‘Living with abuse, undiagnosed autism, and Covid-grade crazy’, also shines a valuable spotlight on a too-often-hidden issue of great social importance.