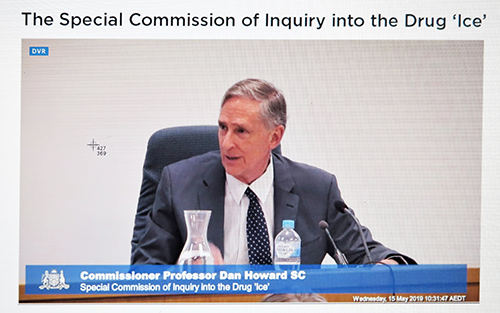 The drug Ice, more formally known as crystal methamphetamine, may trigger a flurry of activity amongst users but it appears to have had the opposite effect on those charged with considering how society should address its widespread use and the harmful impacts on those who consume it.

Former NSW Premier Bob Carr is the latest figure to insist the state government heeds expert recommendations and acts to reduce ice usage, addiction and the criminal activities associated with this damaging drug.

This magazine has run a series of stories on the NSW Government’s attempts to generate some clarity around the issue, beginning with the announcement in 2018 by then-Premier Berejiklian that a Special Commission of Inquiry would examine the issue. A well-informed body was convened and input sought from a range of experts, including addiction counsellors, lawyers, police and Ice (and other drug) users themselves.

Hearings were held in both metro and regional areas - Lismore, was one - with a range of concerns expressed about the impacts of Ice (and other drugs, including alcohol) on anyone using it, especially lower socio-economic groups and First Nations people.

After the Commission reported to the government very little seemed to happen, apart from five of the 109 recommendations being rejected outright, these relating to pill testing at entertainment venues and enhanced safe injecting facilities.

Since then, and following a change of NSW leadership, silence has largely prevailed, apart from criticism of the inaction from the Commission chair, Professor Dan Howard SC.

In an unusual outburst, Howard said, ‘Like the boy who cried wolf, the premier has for so long been saying that the government will ‘very soon’ respond to the inquiry’s recommendations.’

Now his concern has been echoed by former NSW Premier Bob Carr who has urged current Premier Dominic Perrottet to respond to the findings of the $10.8 million inquiry, saying the absence of funding for drug reform was a “shameful omission” in the state’s June budget.

In response Perrottet said a response would be forthcoming ‘very shortly… It’s not about rushing to the outcome. It’s about getting the right outcome and I believe we’re very close to landing it.’

Prof Howard told The Sydney Morning Herald, ‘NSW has now acquired an embarrassing reputation as a laggard state for its decrepit drug and alcohol policy.

‘The lives of people with drug problems are being put at risk in a political ‘dance macabre’ with a feckless government that doesn’t give a sou about them.’

‘I don’t think there’s anything in the zeitgeist that should inhibit the premier from taking the public into his confidence and saying: these are the reforms that have been recommended, it’s in the spirit of harm-minimisation… [like the drug injection centres that were established under then-Premier Carr’s watch].

‘The principles are the same here. Now the challenge is a drug called Ice. If it doesn’t work, we won’t proceed with the experiment, and we will revisit the law.’

Emma Maiden, head of advocacy at Uniting NSW and ACT, which operates the Sydney injecting centre, told the SMH that the inaction was frustrating for the sector and accused the government of ignoring public and expert opinions ‘because they’re too scared of a bad headline.’