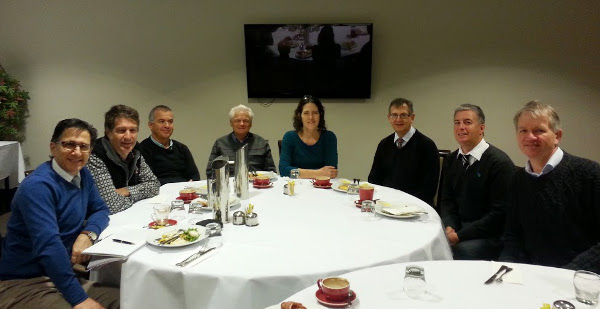 The possibility of getting assistance in the calibration of practice equipment such as spirometers and BP machines was once again canvassed. GP Accreditation support has been maintained by the NCML through its Practice Assistance Liaison Officers scheme, although access to these officers has been reported to be variable from practice to practice. The Board also questioned the possibility of future support for the NRGPN's administrative functions when the current three-year agreement expires on 31 March 2015.

In the past six months the NRGPN Board has recognised the need for national, and in our case local, GP education in the insertion of long acting reversible contraceptives (LARCs). It is also of the opinion that the community-initiated "Last Drinks @ 12" campaign in Byron Bay to minimise the harm from alcohol fuelled sexual assault and violence be supported. Our interest in progressing these issues, as well as others of significance to North Coast GPs, was made clear to the NCML Executive.

Given the cloud over the future of primary care support itself, nearly all GP support issues remain uncertain. The Coalition government has followed the recommendations of the Horvath review and is closing all Medicare Locals on 30 June 2015. It will replace them with Primary Health Networks (PHNs). The size, scope and function of these new organisations has been the subject of much debate and their format will not be known until later this year at the earliest.

This will leave perilously little time for any new organisation to be operational come 1 July 2015. The NRGPN Board felt that once again there could be a tragic waste of time and resources in working through any new administrative arrangements.

All is not doom and gloom in primary health, however. The NCML Emergency Medicine training program for local practices has started across the region. This is being offered through the University Centre for North Coast. The recent workshop on Airway Emergencies in General Practice has been well received.

The Health Pathways Program that originated in Christchurch NZ several years ago has been adopted by a number of centres in Australia. It aims to give all members of the primary and secondary health sectors clear guidelines on how to manage a range of medical issues. The pathways are agreed amongst local clinicians and guidelines are tailored to the constraints created by a lack of local resources. The NCML Health Pathways program started on the Mid North Coast last year and has now been extended to the Far North Coast.

The NCML / Northern NSW LHD Co-location project also started earlier this year and is making headway in options for jointly managing chronic disease patients in the future. To date several clinics have been conducted in local GP surgeries by expert LHD nurses experienced in heart, lung and renal disease.

In addition, the NCML Kaizen program has recommenced this month after a two-year hiatus. This program combines the kaizen philosophy of continuous improvement through local meetings, webinars and surgery visits. It first started on the North Coast eight years ago and has proven to be a highly effective tool in bringing about practice change.

Finally, there is the prospect of further Integrated Care Projects on the North Coast, given the interest of both State and Federal governments in developing more effective and efficient care. The good relationship and innovative spirit in both the primary and secondary health care sectors makes the North Coast an ideal location to trial these new approaches to patient focused care.

The NRGPN is keen to ensure the progress made by the NCML in the last six months can be sustained by the new organisation that will take over. This new PHN will need to have the same commitment to patient focused care and system improvement. We hope to be able to shout, "The King is dead, long live the King."