From darkness to the light 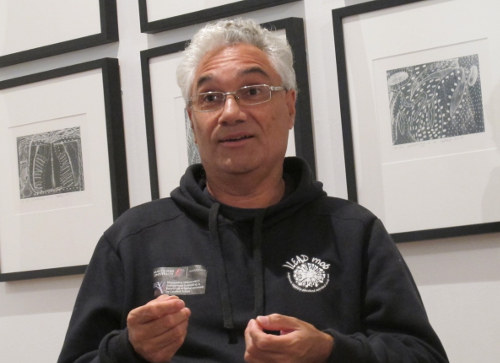 Therapy through art for self-confessed ‘doodler’

Michael Philp, a Bundjalung man who grew up in the Tweed, pulls no punches when describing his childhood and adolescence. His “mongrel of a father”, a non-Aboriginal fisherman, was a violent drinker who badly mistreated Michael’s mother and showed little emotion towards the children.

Although they lived in a beautiful part of the coast, it was a tough upbringing and there was little escape for Michael except music on the radio: he yearned to be a rock star, and would go on to formally study music.

But by the time of his teens, he had begun a descent into drugs and alcohol that would last twenty years.

“I spent those years playing with fire,” Michael told a Lismore Regional Gallery talk to mark the opening of an exhibition spanning his past 15 years of sobriety.

“It was scary to stop,” added the highly talented artist whose latest works feature ‘dots’ in ways uncommon in Indigenous painting.

“I came from a very dark place to the light, and while I’d done a bit of doodling over the years, I certainly didn’t associate art with therapy in any way.”

Panellist in the gallery talk, GP Andrew Binns discussed the therapeutic relationship between the arts (visual, singing, dancing, performance) and health, which is increasingly being recognised by healthcare professionals.

“Michael’s work is a good example of how the artistic process can calm people who have had distress, including adverse childhood experiences.

“Counseling and medication are helpful, but not the only answer. Art therapy is definitely in the mix.” 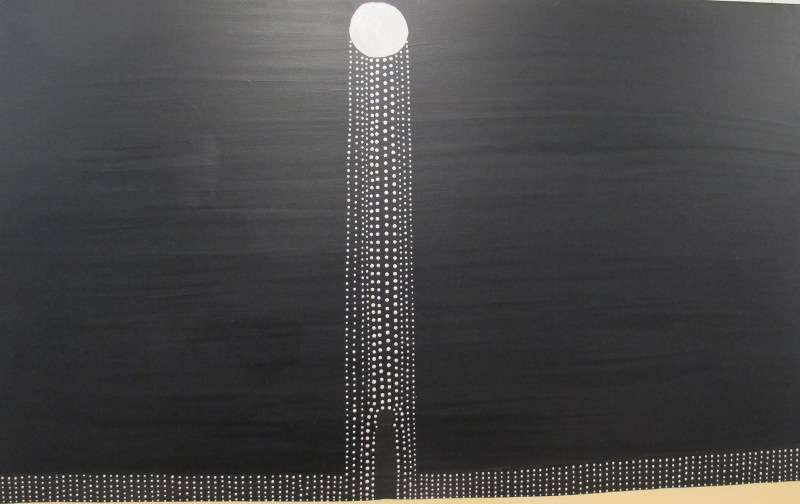 Despite the acclaim his works have received, Michael does not consider himself an ‘artist’ in the usual sense, instead regarding his paintings as a ‘vehicle’ for depicting the spiritual stories of the Tweed area, and his forebears’ family’s place within them.

As he puts it, “I try to paint from the heart… to honour those old people, I don’t paint to sell.”

Michael doesn’t collect art, hangs his own works for only a few days, and tends not to view other Aboriginal art for fear it might influence his style.

His own journey, both emotionally and artistically, is reflected in the progression from his first body of work, the abstract and complex ‘Cosmology In Me’ series of black-and-white drawings, to ‘My Saltwater Murris’, beautifully simple paintings focusing on “identity within a fractured community and changed landscape, as a process of healing.”

Michael Philp: Cosmology In Me is at Lismore Regional Gallery, Molesworth Street, Lismore, until 23 May 2015.