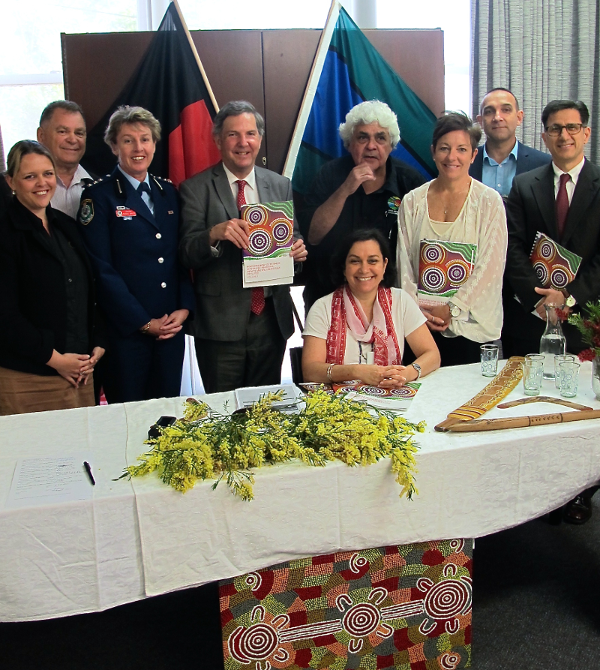 The partners came together in early August to launch the three volumes of the Northern New South Wales Integrated Aboriginal Health and Wellbeing Plan 2015-2020 at the Lismore headquarters of the Northern NSW Local Health District.

The plan lists the challenges and collaborative priorities for the LHD, and other key agencies, in improving the health and wellbeing of the 13,660 Aboriginal people across Northern NSW (4.7 per cent of the population) over the next five years.

It includes a detailed profile of Aboriginal health and wellbeing in the Aboriginal communities comprising the Bundjalung, Yaegl, Gumbaynggirr, and Githabul Nations.

Vol 1 overviews the development of the plan, which took 12 months and included extensive regional consultations with Aboriginal organisations and individuals. It also lists the goals and strategies for building partnerships and better targeting service delivery. These highlight the social and cultural links with improved health outcomes. Strengthening the Aboriginal workforce is another focus.

Vol 3 is a resource listing services currently available and those responsible for managing them.

Vol 2 is where the sombre statistics on Aboriginal people’s health circumstances are described. Compared to the non-Aboriginal population, they have:–

And so it goes on, although it will not for too much longer, if the analysis and recommendations in the plan are appropriately acted upon by those involved with its development. This includes Aboriginal people themselves, too many of whom are suffering from preventable diseases resulting from, or exacerbated by, factors such as tobacco use or high body mass issues.

North Coast Primary Health Network CE Vahid Saberi called the plan “a very significant event for the region…a turning point”, mentioning it in the context of the Mabo decision and the 2000 walk for Reconciliation across Sydney Harbour Bridge.

LHD Chief Executive, Chris Crawford, noted that, “Through the consultation process, Aboriginal communities repeatedly raised concerns about substance abuse, sexual health and communicable disease, maternal and child health, chronic disease, and the lower life expectancy with Aboriginal people.”
He added, “However, the poorer Aboriginal health status is not just about health. It is also about the provision of housing, drinking water, and sewerage services for local residents.”

Hence the inclusion of a range of other government agencies in the initiative.

Deborah Monaghan writes in her introduction that, “The Plan presents an opportunity to build on partnerships and to work together to develop services in a way that addresses the needs of a growing Aboriginal population.

“I am confident that if we work together this Plan will help us to improve the health and wellbeing of the Aboriginal people living in Northern NSW.”