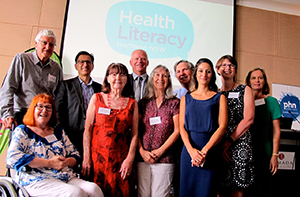 There is a serious disconnect between the reading ability of many Australians and the complexity of the health care information they need to understand, according to the chief executive of Northern NSW Local Health District, Wayne Jones.

Consequences include up to 40 per cent of booked surgeries being postponed because written instructions such as fasting are not followed, and 20 per cent of discharged patients not understanding their medications.

On the North Coast, Mr Jones revealed, up to one-in-four patients do not comprehend what doctors and nurses tell them, adding that while the average reading age sits at around school years 6 to 8, much of the material people receive is pitched at levels 11 to 12 years.

Such figures explain surveys showing up to 60 per cent of Australians have low health literacy, a term defined as “how well people can obtain, communicate, process and understand health information and services to make appropriate health decisions.”

Mr Jones was speaking at the 16 December launch in Ballina of the Northern NSW Health Literacy Project, a joint initiative with the North Coast Primary Health Network, which has appointed a project officer to help drive it.

Considerable work has already taken place, drawing on Australian as well as overseas experiences, with resources including a comprehensive website and educational kits for consumers and clinicians.

“Health literacy is a safety and quality issue,” Mr Jones said, explaining that both the general community and health service providers, including GPs, would be assisted to develop a better understanding through a series of free workshops commencing early in 2017.

Initially these will be based in the top half (Northern Rivers) of the PHN’s footprint.

The health literacy framework aims to focus on people with chronic conditions and complex care needs, including people with mental illness.

The advice for consumers includes the suggestion to ask three questions of their doctor at each appointment, and to write down the answers to share with family or carers.

Simplifying patient leaflets had been done very effectively in the Illawarra Shoalhaven LHD, the launch was told.

PHN chief executive Dr Vahid Saberi described the project as an important step forward for this region, saying that boosting the awareness of clinicians - “who believe they’ve done their job medically” - will be crucial.

“It’s a paradigm change… The greatest prescription is to empower patients,” he added.

“It’s essential for them to be collaborators in their care, not just passive recipients. People need to have the right information in order to be agents in their care.”

Dr Saberi praised the enthusiasm of former NNSWLHD head Chris Crawford, who attended the launch, for his long advocacy around the health literacy issue.

When asked by GP Speak if encouraging greater discussion around illnesses and treatments might result in longer GP consultations, Dr Saberi said the benefits of promoting better understanding, and fostering “self help”, are clear.

“However, there could be a ‘trade-off’ and this might highlight the shortcomings in the fee-for-service payment equation.”

The NNSWLHD’s health promotion manager, Jillian Adams, said the outcome should be a “more efficient use of time, resulting from patients having a better understanding of their conditions.”

At present, according to health literacy project officer Taya Prescott, many people have already embarked on the health literacy journey, with one-in-five 65-year olds and up seeking health information online.

No doubt the project is hoping that the advice received from Dr Actual will prove to be more valuable than that provided by Dr Google.