In Bali, seek the best and avoid the rest 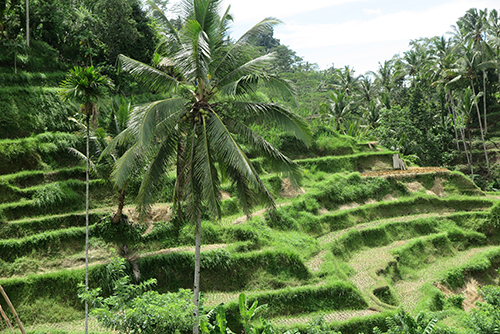 As the accompanying photos show, the Indonesian island of Bali is still an extraordinarily beautiful place, despite the endlessly negative stories about the behaviour of foreign tourists, including plenty of Australians, around coastal resort areas such as Kuta and Legian.

I’m more aware of this than most, having visited Bali in 1971 on the way back to my then-hometown of Hong Kong and being the only… read that again, the only, foreigner on Kuta beach to view the wondrous sinking of the afternoon sun into the sea. Now that spectacle must be shared with thousands of tourists gathered on beanbags outside bars blaring reggae, the Rolling Stones, whatever, over huge speakers, with collective cheering when the sun sets.

The Redgum song “I’ve been to Bali too”, released in 1984, implied that one visit to Bali would be enough, that box was ticked, but for me too much Bali has never been enough, assuming you stick to the best places, Ubud in the hills being prime amongst them, and avoid the rest.

Speaking Indonesian, the lingua franca of our neighbouring country of 270 million people, mostly outside Bali, helps of course. All Balinese speak it, along with the various cast-influenced levels of their own language.

These days there is something apart from Bali’s beauty on the menu, quite literally as some top restauranteurs are hanging out the fine-dining shingle for those wishing to go beyond fast food, nasi goreng (fried rice) and lots of Bintang beer.

Their numbers include Janet de Neefe, married to a Balinese and founder of the Ubud Writers Festival, who runs several restaurants and has published an admirable cook book, Bali: The food of my island home. Another is Will Meyrick whose properties, specialising in Indonesian-fusion food, include Ubud’s Hujan Locale. His passion is helping train Balinese in the kind of food preparation and service sought by discerning visitors.

Another pivot is the increasing popularity of Bali as a “wellness” destination, in other words less Bintang and cheap cocktails at the swim-up bar and more downward-dogs at the multiplying yoga schools and health retreats. In a recent feature on how “yoga is replacing parties for Aussies visiting island paradise” The Weekend Australian (11-12 Jan 2020) said the Yoga Barn in Ubud attracts more than 400 people a day to classes, and employs 170 staff.

Although perhaps over-hyped, this latest addition to the tourist mix opens up a new market at a time when the Balinese economy is continuing to struggle, despite the constant stream of international flights arriving at Denpasar’s massively upgraded terminal each day. Arrivals could not be more different to those who came here nearly fifty years ago when I first set foot in a place that seemed to exist more in legend than reality… or in a stage show, South Pacific, with a featured song “Bali Hai” that referred to Hawaii.

But despite all, and the shameless alienation of farm land for golf courses and resorts, the real Bali is still there, not many hours flying time north, and the Balinese are genuinely delighted to welcome us, to try to explain their complex culture if we show interest, and to thank us for visiting.

I’ve been to Bali too, and hope to be doing so for many years to come.