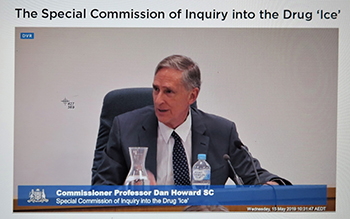 Following inquiries from GP Speak and sustained pressure from various quarters, including the Royal Australasian College of Physicians and the Ted Noffs Foundation, as well as a threat by the NSW Greens to have parliament force the document’s release, the Berejiklian government has made public the special Commissioner’s report into the drug ‘Ice’ (crystal methamphetamine) and other illicit substances.

The four-volume report follows the Commission’s exhaustive hearings in Sydney and various regional settings, including Lismore, where drug experts, including ex-users, spoke of an epidemic of ‘ice’, the widespread misuse of other illicit drugs (and, notably, alcohol), and highlighted the lack of treatment and other support services in both the legal and health systems.

Despite a much-criticised delay in releasing the report the government was quick to respond to some of the key recommendations. It has rejected the advice to open more medically supervised injecting centres, run needle and syringe programs in prisons, allow consumer substance testing (a.k.a. pill testing) and end the use of drug detection dogs.
Accepting such recommendations would entail what Commissioner Dan Howard SC called a “paradigm shift” required from health services, law enforcement and other agencies to drastically advance the battle against ‘Ice’ and other amphetamine-type stimulants.

This is neither the first official report on the vexing topic of drug misuse, nor indeed of ‘Ice’ specifically. From 2015-2018 the Federal Parliament’s Joint Committee on Law Enforcement conducted an inquiry into crystal methamphetamine noting that, “… a person’s drug use is a health issue and for this reason, Australian governments and law enforcement agencies cannot arrest their way out of it.”

This sentiment was voiced countless times to Commissioner Howard’s inquiry, including by police, and informs the view of health practitioners and drug experts around the nation. However, the corollary to this is where things become controversial.

The Federal report noted a consideration (based on a visit) of Portugal’s response to problematic drug use: decriminalisation: “Although decriminalisation exists in many different policy contexts in numerous countries (including Australia), evidence to the committee frequently identified Portugal’s decriminalised drug policy as a model of best-practice.”
The Berejiklian government’s policy rigidity is far from this point and came as little surprise in a week when police were being criticised for illegally strip-searching minors suspected of harbouring drugs at music festivals.

Having moved swiftly on the recommendations the government did not support, Health Minister Brad Hazzard said it would consider the remaining 104 recommendations “in consultation with stakeholders” and prepare a final response before the end of the year.

These recommendations include the decriminalisation of the personal possession and use of ‘Ice’ and other illicit drugs.