Paper Clips - not for everyone 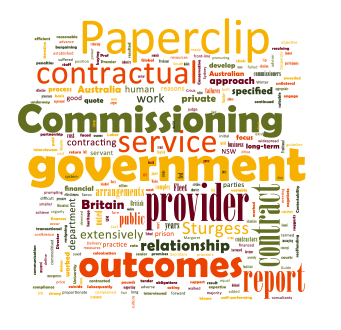 Commissioning and contracting has been used extensively by the British and Australian governments for many years. In fact it goes back so many years that one could argue that Australia owes its existence, or at least its English heritage, to commissioning.

The initial wave of colonisation was financed through contractual arrangements for the First Fleet in 1787 and was followed over the next few years by the Second and Third Fleets with similar arrangements. The effectiveness of these arrangements was variable on some measures. The death rate of the prisoners on the Second Fleet was 40%.

Commissioning started to be used extensively in Britain following the election win in late 1979 by Margaret Thatcher’s Conservative government that had followed the “Winter of Discontent”, marked by widespread strikes under Labor.

Commissioning came to the fore in Australia under the NSW Greiner government in the late 80s and was led by the Premier’s Secretary, Gary Sturgess. Sturgess worked extensively in Britain in government and private practice in the 2000s before resigning his position as Executive Director of the Serco Institute in 2011 to return to Sydney, where he now holds the chair of Public Service Delivery at the Australian School of Business, University of New South Wales. He has, however, continued to work as an adviser in Britain, most recently in 2017, with his paper Just Another Paperclip.

The UK suffered more severely than Australia following the Global Financial Crisis. The pressure on government finances led the public service to drive down the costs to the public purse for contracted services. Desperate for work some providers slashed their quotes by up to 30% but many, as a result, failed to fulfill their contractual obligations. They were in turn sued by the government for millions of pounds, prompting several government reports into the reasons for the failures.

Professor Sturgess delves extensively in his report as to the reasons for the failures. He starts with a quote from a public servant.

‘In a meeting with industry, a senior civil servant expressed his view that contracting was suitable for procuring paperclips, but not for complex public services.’

Sturgess notes that “... buying ‘paperclips’ – highly commoditised, easily specified goods and services – are not appropriate for commissioning complex support services and front-line human services.” Traditional contracting had been on the basis of an established long-term relationship between the government and the provider where trust between the two parties and expertise in the provider had built up over time.

After the GFC the relationship became government and provider became more “transactional”. The service was specified, often somewhat vaguely, and the lowest tender usually won, often with the adverse consequences noted above. Subsequently many providers walked away from the government market for human services.

While the British government may have paid lip service to supporting long-term relationships some of the contractors whom Sturgess interviewed complained that, ‘Government is full of promises – equal terms, partnership, proportionate risk – but when you get down to it, the relationship is unilateral’.

Many providers noted that smaller, shorter contracts were more likely to be awarded on price, often with an increased focus on “compliance” and with the government being more ready to resort to financial penalties if the contract was deemed not to have been met.

These providers faced the difficult situation of the various government departments acting as both judge and jury. It was noted by some interviewees that if such arrangements were to occur in the private sector the courts might find that there has been an abuse of bargaining power and that the contract had ‘not been done in good conscience’.

One approach to resolving this issue in human services has been termed "commissioning".

The concept is that interested parties work with the government department’s “commissioners” to negotiate and define the contract’s processes and outcomes. This is often an iterative process with resources and outcomes being more clearly defined over time. In NSW the process has resulted in a guideline for participants and contractors, the Government Commissioning and Contestability Practice Guide.

This approach is said to have worked well. After a stormy start Prof Sturgess reports Britain’s private prison system found that “the vast majority of the outcomes involved in managing a well-performing prison can be specified in advance as well as measured (although work is still underway on the objective of reducing reoffending, which has only recently been added to the list of key outcomes).”

He suggests the way forward is for government departments to be clear on what they want and to engage with providers on how to achieve it. They should focus on value, not just cost, and mean it. They need to develop strong relationships with the providers and over time develop confidence that the provider will do an effective and efficient job. There is honest communication, fair treatment of staff and everyone is in for the long haul. There are few outside consultants, no contractual tricks and no blame culture.

This all sounds very reasonable. I could do business with the commissioners taking this approach.