Hats off to a North Coast icon 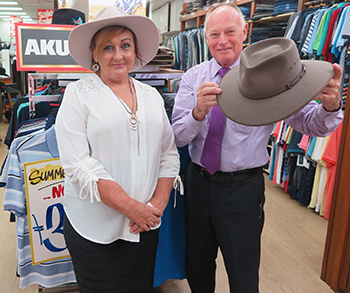 Whether due to our increased sun awareness or a notable rise in “fashionalism” – which sees MPs from country and city alike sporting R M Williams boots – the Akubra hat is now covering more heads than ever before. In fact they’re so popular that anything apart from a standard style and colour will entail a three-months order wait, not that off-the-shelf options are lacking in choice.

The leading local Akubra stockist is George Gooley Menswear with shops in Lismore, Ballina and Casino. The business is headed by Peter Gooley who says sales of the iconic headwear have risen dramatically in recent times.

No newcomer to the Akubra game, Peter has been selling the brand for the past fifty years: “The most popular style remains the Cattleman,” he told GP Speak, “followed by the Roughrider. But if that suggests most Akubra buyers are farmers, think again. The hats have become increasingly popular with younger people, male and female, and the various styles and colour combinations are almost infinite.”

If you’re prepared, to wait that is.

Peter Gooley estimated that the business sells around 80 Akubras a week across its three main shops, a healthy trade but hardly a dent on the 1500 hats they keep in stock.

“A few years ago we kept nothing like that, just one rack of them. If someone had suggested how popular they would become I wouldn’t have believed them.”

Right on cue, a customer came into the Lismore store and picked out a handsome new… Akubra.

Local sales are greatly outstripped by the national market, not least a long-term contract signed by Akubra in 2015 to supply 21,000 ‘slouch hats’ to the Australian armed forces. An Akubra forerunner company launched in 1874, with the Akubra brand itself dating from 1912. For a time the firm had the rights to make and market the American cowboy brand, Stetson, but Akubra was more popular and the firm now exports to the US market.

Factory locations have included the foundation site of Hobart, then Sydney and from 1974, the Mid North Coast town of Kempsey where the business is still headquartered.

One thing that has not changed over time is the raw material required to make an Akubra, not something to please animal lovers - rabbit fur. The process, which takes around six weeks, dates from the late 19th century when the pelting process was perfected.

A 1950s ad proudly claimed that, “All Akubra Hats are made from Pure, Long-matured Australian Fur by highly skilled craftsmen.” In those days a new Akubra cost around £1.00. Now they’re just shy of $200, and while the manufacturing is more sophisticated and the rabbit fur is mostly imported (from Europe), nothing has rendered this legendary product any less desirable to new generations of hat wearers. Indeed, the Akubra is more popular than ever.