Book Review - The Man in the Red Coat 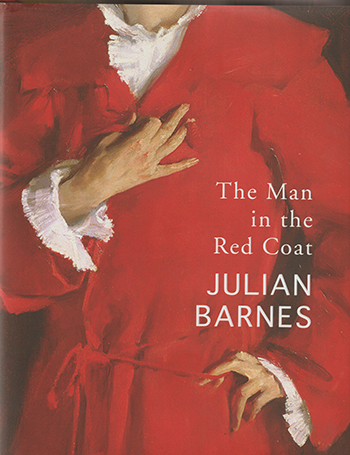 This learned and beautifully produced book delivers the story of Dr Samuel Pozzi, a pioneering gynaecologist, and two fellow bon vivants, into the hands of one of the finest contemporary novelists. This is Barnes’ eighth foray into non-fiction, helped by a heaven-sent character and a time in history, the Parisian Belle Epoque, when almost anything went.

The tale begins in the mid 1800s when what Barnes dubs a “strange trio” embarked on what they called an “intellectual shopping trip” to London. While luxury shopping was undertaken, and museums visited, carousing and debauchery were more often on the agenda.

The tale oscillates between the capitals of France and England, more often the former as the author explores the mores and social connections of the period, helped greatly by his passion for the French language and Gallic ways, which led to his being awarded the Legion d’honneur in 2017.

This is not just a book for Francophiles, and indeed it is hard, initially at least, to believe it has a grain of truth. Then we are introduced to the cropped cover painting by John Singer Sargent, which the author encountered in the National Portrait Gallery in London, on loan from America.

The title of the elegant 1881 work is Dr Pozzi at home, “painted in the late mornings,” we are told, “after which artist and subject had lunch together… It is all highly theatrical: there is swagger not just in the pose but in the pictorial style.”

To say there was swagger in the life of Dr Samuel Jean Pozzi, born a commoner and destined to become “a society doctor, a book-collector, and a generally cultivated conversationalist”, would be a massive understatement. Think a heterosexual Oscar Wilde possessing exceptional skills with the scalpel, a wealthy womaniser who mixed in the circles of Proust, Henry James and Collette, and who stood up for Dreyfus when to do so attracted opprobrium.

All this made Barnes become “less interested in Pozzi the amorist, and more in Pozzi the fraught family man, Pozzi the ever-curious doctor, Pozzi the traveller, Pozzi the urbane figure… the Darwinist, the scientist, the modernist… Pozzi, a sane man in a demented age.”

However, his travelling companions to London were anything but sane: Prince Edmond de Polignac and Count Robert de Montesquiou-Fezensac conducted themselves more like teenagers at schoolies, one of them an outrageous homosexual.

Nor did Pozzi hold back, being aware of his charm, excellent English and great attractiveness to women, yet “there was, for almost his entire life, very little scandal attached to Pozzi’s name. His activities were heterosexual, legal and (as far as we know) consensual… there is not a single recorded note of female complaint against him.”
Just as well because back in Paris he was soon “transforming French gynaecology from a mere subdivision of general medicine into a discipline in its own right,” and in 1890 publishing his 1110-page Treatise that won international fame and celebrity patients. It would remain the standard text into the 1930s.

During WW1, in a handsome uniform (of course) Pozzi became deeply involved in the theory and practice of war wounds, while continuing to collect antiquities and garnering praise for long-distance consultations, including for Sarah Bernhardt who called him “Doctor God”. Near war’s end Pozzi was shot by a former patient for whom has had conducted a scrotum procedure. The patient then turned the gun on himself.

Pozzi underwent surgery, specifying the anaesthetic he desired – “enough to nullify the pain, but not enough to put him out. And so he is present at, and fully aware of, the last .,laparotomy he will attend in his life.”

No novelist, even a fine one like Barnes, could invent such a tale and again we see how fact can be stranger than fiction.