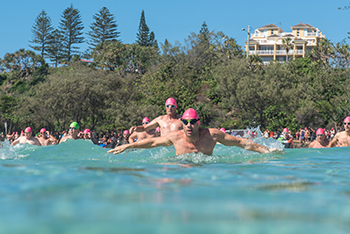 The routine is monotonous but, somehow, part of the appeal. The alarm sounds at 4.45 am and I swing my legs from under the covers, and guide them onto the floor boards, the only clue as to the season. The ritual continues… feeding of animals, breakfast and coffee, the goal being to exit the the garage at 5.15. The journey is invariably notable for the lack of recollection, with arrival at the pool being the first stable memory of the still-young morning.

The next is the cool of the water as it rushes over my skin, focusing my attention on the present.

I was always something of an “aquanaut”, a competitive swimmer in my early teens before playing waterpolo for the Victorian junior team, representing USyd at the University games in water polo and being selected in the Universities’ Green and Gold side.

But then somewhere in the melange of training, work, and life at large my love of the pool slowly evaporated. Whilst playing waterpolo I continued swimming but its rewards had disappeared. Then, five years ago, I started a comeback of sorts, swimming at Lismore baths with a local coach.

I vividly recall swimming 300 meters, hauling myself on to the lane rope and exclaiming that I would never again let my swim fitness lapse, although as anyone who has ever trained for swimming knows, the monotony of the black line is enough to drive one almost insane… up and down, struggling for breath, dragging yourself through a progressively more viscous fluid at an hour when few had even struggled out of their crib can lose its appeal quickly.

Enter ocean swimming, a concept that instils fear into the hearts of many but for those who indulge the rewards are plentiful.

My first ocean swimming experience was as a young boy swimming in the Pier to Pub race in Lorne, Victoria. My only recollection of the whole experience was profound hypothermia. Hardly a memory that would lure someone back to the ocean.

Despite my previous experience I jumped at the chance to swim with my then-coach in Byron Bay. For those oblivious to this unique group of athletes the Byron winter whales are a group that swims every day of the year, usually leaving from the Byron Bay surf club at 8.00 am. This group of kindred spirits shares the love of ocean swimming but represents a tapestry of society. Male and female, working professionals, retirees, visitors, the young and the not-so, the physically and mentally fit. It’s a ritual and one that will take place in reverse in an hour or so’s time.

Swimmers meet on the decking at the club for some light chat before the body’s coverings are shed – the great equaliser - and en masse the school (collective for ocean swimmers) take to the beach and begin the walk east up the beach to respective take-off points.

Herein lies what my journey has taught me. As I have aged paying attention to my mental health has become an active process. This walk along the water’s edge is a process of mental cleansing. This time allows swimmers to chat, meet, develop friendships, solve the worries of their various worlds.

It would be fair to say that I have made some of my closest friends en route to Wategoes Beach. I have found clarity in situations which I had thought unnavigable. Felt a sense of camaraderie and kinship, allowed feelings of solitude to dissipate.

While in pool swimming the the black line acts as a hypnotic, meditative visual, with the rhythmic pattern of breathing leading to a state of transcendence. The contained environment cannot compete with the great outdoors, not least the natural beauty of Byron. 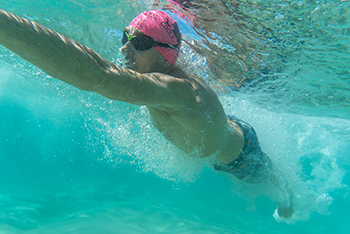 On a good day the water at Wategoes has a clarity that enables the swimmer to see for metres, and when that world opens up it is quite a special moment. The surging sea lifts the swimmers one by one and the intermittent breaking of the waves sees members of the group duck-diving for the safety of the ocean below the white foam. The reef and schools of fish all dance to an individual rhythm.

The first 400 meters of a typical swim takes us to the Pass where the sea here is usually calm, with a gentle undulation of distant waves as they flow by en route to entertain the surfing masses riding boards. It is here when encounters with turtles, perhaps rays, and even shovel nose sharks or wobbegongs are common. It is amazing to be mindlessly swimming along and suddenly swim over the top of a turtle or find yourself in the middle of a school of fish.

After what would have to be the highlight of any swim from Wategoes to Byron the race is now on in earnest back to the surf club, with the master tacticians plotting their approach, competing in good sprit with the coast huggers , those who choose to swim straight across the bay, and all routes in between. The variety of paths taken is reflected by the individuality of those who practise this religion. Some swimming with friends, stroke by stroke, others engage in a solitary race to the showers at the front of the surf club overlooking the magnificent bay.

When we all catch the final wave into shore the sand rises to greet our bodies, contacting with the real world that awaits on the beach… the backpackers, couples, families, others savouring their own version of Byron’s scene.

The crew seek out towels and slip back into the pre-swim attire, transformed back into land creatures, until the next time. Tales are shared about wildlife sightings, who swam well, what courses were taken, the weather conditions, chop, temperature, weed, stingers and, most importantly, when we will all be back to do it again.

The final piece of the therapeutic episode is the almost mandatory post swim coffee and debrief, little more than a rehashing of all the stories told since that final wave.
In the way that the ocean is constantly changing no two swims are ever the same, and that’s why I think we all keep coming back. It’s for the surprises, the pleasure and the pivotal role ocean swimming plays in our physical and mental wellbeing.

Dr Daniel Bills MBBS BSc (Hons) FRACS is a Colorectal and General Surgeon based in Lismore and Ballina. Following a first-class honours science degree at Monash University he graduated from The Sydney University School of Medicine in 2001. He received his fellowship in general surgery in 2008, going on to complete a colorectal fellowship in minimally invasive colon and rectal surgery at the John Flynn Hospital in 2010.

He has held academic posts with Bond, Griffith and Monash Universities and is a current foundation member of the Royal Australasian College of Surgeons Academy of Surgical Educators.

In addition to his work in minimally invasive colorectal surgery, he treats a range of general surgical conditions such as Skin Cancers, Hernia and Gallbladder and performs investigative endoscopy.