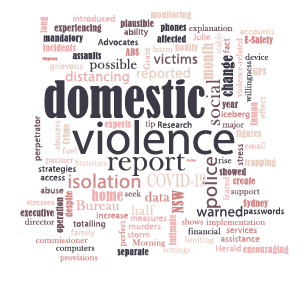 NSW Police data showed no major increase in reports of domestic violence during March 2020, despite the implementation of social distancing measures that experts feared would fuel violence at home, according to a report by the Bureau of Crime Statistics and Research. However, reported domestic violence related assaults began to rise in March, totalling 2678, up from 2632 in the same month last year.

However, this is only the tip of the iceberg, as ABS data shows that only half of all domestic violence is reported to police. NSW saw two murders and 35 incidents of domestic violence-related grievous bodily harm this March. Advocates warned that mandatory isolation, along with financial stress and a change in the operation of support services, would create a ‘perfect storm’ for intimate partner and family violence.

‘It is possible the figures are stable because isolation strategies have affected the willingness or ability of people experiencing domestic violence to seek assistance from police,’’ the report warned.

E-Safety commissioner Julie Inman Grant said abusers may be trapping their victims at home and limiting their access to phones or computers, meaning they are unable to report abuse.

‘‘That’s a very plausible explanation for the fact that domestic violence reports have not gone up,’’ she told The Sydney Morning Herald, encouraging victims of domestic violence to start new email accounts, turn off GPS settings, change passwords and use a separate device to the perpetrator where possible.

The Bureau’s executive director Jackie Fitzgerald said social distancing provisions were only introduced for half of the month: ‘‘We haven’t had long for the stresses of social isolation to take effect, and will certainly keep monitoring.”