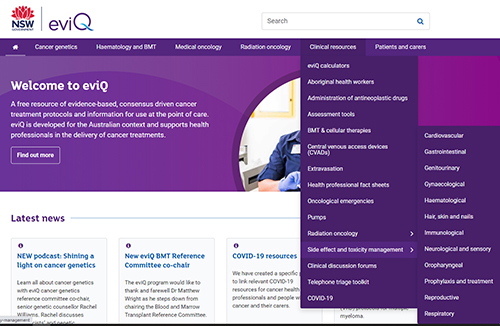 Oncology and haematology are currently experiencing a significant shift in therapeutics, with more novel agents being produced and immunotherapy being approved for a greater range of malignancies and circumstances. Even for specialists in the field, keeping up to date with the latest agents, their use and their side effect profile is challenging.

Immunotherapy
The importance of the interaction between a tumour cell population and the immune system is currently being studied extensively, with notable inroads into changing the balance in favour of the patient.

Immune mediated cell death can occur at the site of the cancer when Natural Killer, T and B cells recognise abnormal antigens expressed on the surface or released by a cancer cell. Mediated through cytokines, including IL2 (interleukin 2), the interferons IFNα and IFNγ, these immune cells cause immediate cell death, forming part of the innate immune response. The adaptive immune response is far more effective and specific: Antigen Presenting Cells (APC) migrate to regional lymph nodes, present cancer antigens using the interactions between MHC-T Cell Receptors and CD28-CD7 costimulatory molecules, thereby initiating a population of T cells that are specific against the cancer cells. These T cells recognise any cell expressing the specific antigen leading to cytotoxic cell death. Cancer cells can evade this immune mediated cell death by:

1. Mechanism of Action – PDL1 can be inhibited by monoclonal antibodies either targeting PDL1 on cancer cells or by targeting PD1 on T cells. This inhibition allows the cytotoxic T cell to destroy the cancer at the site of the tumour. PDL1 inhibitors include Pembrolizumab and Nivolumab. PD1 inhibitors include Atezolizumab, Avelumab and Durvalumab.
CTLA4 can also be inhibited by specific monoclonal antibodies, leading to the activation of T cells at lymph nodes, which can then specifically target the cancer cells. Ipilumumab is currently the only approved.
2. Efficacy example – the above agents became famous when single agents combining Ipilimumab and Nivolumab were used for metastatic melanoma with response rates of 68.1%, compared to 8-10%, for the previous standard of care, chemotherapy. The median overall survival for patients with metastatic melanoma has increased from 10.8 months to 37.5 months since these landmark trials: CHECKMATE 066, 067 and KEYNOTE 006.
3. Metastatic setting – Combined immunotherapy with CTLA4 and PD1 inhibitors is approved for metastatic melanoma and high-risk renal cell carcinoma. Single agent PD1 inhibitors can be used first line for metastatic melanoma, non-small cell lung cancer with high PDL1 expression, and as second line in squamous cell head and neck, hepatic cell carcinoma, cervical, renal cell, lung, bladder cancer and refractory Hodgkin lymphoma and primary mediastinal large B cell lymphoma.
4. Adjuvant setting – PDL1 inhibitor Durvalumab has been approved for stage III non-small cell lung cancer post chemoradiation (PACIFIC) and Nivolumab approved for completely resected stage IIIB-IV melanoma with a reduction in recurrence of 20% (CHECKMATE 238). Duration of therapy is 12 months.
5. Combination with chemotherapy – The addition of chemotherapy to immunotherapy increases response rates likely due to chemotherapy causing cytotoxic cell death, thereby increasing the tumours exposure to immune cells and releasing more cancer antigens. This combination is now approved in small cell and non-small cell lung cancer.
6. New Evidence – emerging studies have revealed a significant improvement in disease free survival using immunotherapy in combination with chemotherapy for triple negative breast cancer (KEYNOTE355), immunotherapy post chemotherapy for bladder cancer (JAVELIN Bladder 100) and immunotherapy instead of chemotherapy for microsatellite unstable (high mutation rate) colon cancer (KEYNOTE177). These are not yet approved by the PBS.
7. Immune related adverse events - irAEs are common and idiosyncratic. Each patient’s immune system is unique and therefore each patient can develop different autoimmune sequlae when receiving immunotherapy. A history of significant autoimmune condition is a contraindication for immunotherapy.
Adverse effects include - fatigue (36%), rash (23%), diarrhoea (21%), hypothyroidism (11%), arthritis (10%), hepatitis (5%) and less commonly hypopituitarism, pneumonitis, myocarditis, meningitis and Guillain Barre Syndrome (GBS). The majority are mild, with immunotherapy better tolerated than traditional chemotherapy. However, the combination of two immunotherapy agents is associated with significantly higher discontinuation rates, with up to 50% being unable to complete the scheduled treatment.
Treatment of irAEs – mild events can be treated symptomatically (example – commence thyroid hormone replacement for hypothyroidism) and immunotherapy can be safely continued. Moderate events require steroids, generally 1mg/kg prednisolone and a treatment break. Severe events often require hospitalisation and intravenous steroids such as methylprednisolone and the use of immunosuppressive agents including mycophenolate for hepatitis, infliximab for arthritis, IVIG for GBS.
8. Resources – the NSW Health eviQ website has a range of information for patients and professionals. Most treatment protocols are easily and freely accessible, explaining the schedule, administration, side effects and evidence. There is also a document “Management of immune-related adverse events (irAEs)” under the “Clinical Resources” tab.

Other Immunotherapies
Chimeric Antigen Receptor T (CAR-T) Cell Therapy – Patients with refractory DLBCL or B cell precursor acute lymphoblastic leukaemia have their T cells extracted and genetically modified in vitro. A gene is transduced into the T cells and encodes an anti-B cell chimeric antigen receptor. This cell line is duplicated and reinfused into the patient. Response rate has been very promising, however there is a high rate of cytokine release syndrome.
Bispecific T cell Engagers (BiTEs) - These are engineered antibodies with two variable fragments, one with specificity to T cells (CD3) and the other to a specific cancer antigen. The antibody therefore links a cytotoxic T cell to a cancer cell, theoretically resulting in cell death. Currently being studied in numerous haematological malignancies.
Cancer vaccination - Sipuleucel-T is approved in the USA for the treatment of metastatic prostate cancer. The patient’s white blood cells are extracted from blood and exposed to a specific prostate antigen in the lab, supported to duplicate and then reinfused into the patient. There was a modest improvement in median survival.

Conclusion
Immunotherapy is an expensive but effective treatment in numerous malignancies, with emerging evidence changing standard of care on a regular basis. Compared to traditional chemotherapy, it has the capacity for a long-lasting response with better tolerance. Adverse effects are unpredictable, sometimes severe and require a high index of suspicion. Personalised medicine is being actively researched and antibodies engineered with therapies like CAR-T and BiTEs on the horizon. Indeed, times are exciting in oncology and haematology.