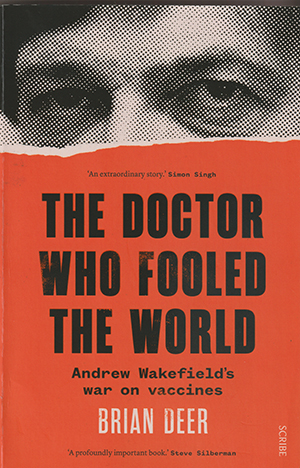 This claim, based on compromised research, caused massive parental concern and led to a plunge in global vaccination rates. Even more astounding was how the charismatic (that word again) and self-promoting Wakefield could receive such support from key sections of the UK and, later the US, media, and senior lawyers.
Most concerning was the backing of many medical colleagues, sucked in, it seems, by his presentation: “He is tall, handsome, charismatic [!] and above all a man of conviction… utter sincerity and honesty,” said an Australian colleague, John Walker-Smith, dubbed “more English than the English” by the author.
Fortunately, some were less gushing but alas not in time. Dr Mark Pepys, the red Jaguar driving, massively high-achieving head of Hampstead Hospital, would list twenty-five conditions for taking his new job. One of which was the immediate termination of Wakefield: “I knew he was a wanker and a fraud.”
Such a view lay in the future in 1988 when the 32-year-old Dr Wakefield, a junior surgeon, arrived at London’s Royal Free Hospital, a struggling institution, and soon began pondering the “undiscovered culprit” for Crohn’s disease. This, he would decide, was measles, particularly for patients who had been immunised against it. A Wakefield-led team conducted a study, which would be published over three pages in The Lancet. Because they hedged some bets the journal added a question mark to the article’s title: “Is measles vaccination a risk factor for inflammatory bowel disease?”
As Deer notes, this provoked some amusement, with the wording called an example of ‘Hinchliffe’s rule’ - “If the title of a scholarly article is a yes-no question, the answer is ‘no’.”.
In journalism it is known as ‘Betteridge’s law of headlines’. As scribe Ian Betteridge wrote, “The reason why journalists use that style of headline is that they know the story is probably bullshit, and don’t actually have the sources and facts to back it up, but still want to run it.”
Clearly the bullshit detector was turned off at The Lancet at a time when the editor Richard Horton, a former medico, had recently assumed the role. Sadly, little seems to have changed since. When I began this book The Lancet had just retracted a published article about global trials of hydroxychloroquine for Covid-19 after a Guardian investigation found inconsistencies in data provided for the research by US company Surgisphere.
Exonerating the journal, and presumably himself, from any blame the “appalled” editor, the same Mr Horton, said, “This is a shocking example of research misconduct…”
He would hold the position throughout the Wakefield scandal and use it, wittingly or not, to promote the dodgy doctor’s arguments, seemingly with the aim of furthering his journal’s prestige as a medical news-breaker.
In 2004 Deer met with the “dapper” Horton, flanked by five staff, and confronted the journal with inconsistencies in the published Wakefield articles. His focus was that the small sample of parents blaming the three-in-one shot for their child’s “developmental regression” had been privately encouraged to do so by Wakefield’s legal team. The motive was that successful legal action could win them millions in compensation. Wakefield’s take would be hefty consultancy fees.
Worse was the suffering inflicted on children who had been “forced through the hospital, some kicking and screaming, for the battery of sedations, scopings, scans, spinal taps, blood draws, and barium drinks.”
Noting Horton was “struggling to suppress a reaction”, Deer adds, “Not only was he a medical practitioner, but for years he’d virtue-signalled on such matters… He was Dr. Squeaky Clean on propriety.”
As their five-hour meeting progressed - sandwiches for lunch - his colleagues from The Sunday Times were across town meeting with Wakefield himself, just returned from Austin, Texas for an interview that Deer was barred from attending: “He saw a chance to work his charisma on journalists who lacked my grasp of the facts.”
Wakefield was hammered, the “killer issue” being the ethics of his working secretly with lawyers for the parents of children whose genuine deficits, including autism, could not be attributed to the MMR vaccine.
When asked if the link should have been disclosed, Wakefield disagreed.
“And there he was, Rules didn’t apply to him. Not even rules to protect the integrity of potentially life-impacting medical research… I acted with due propriety in every case, I have no regrets.”
When the Times front-paged the story (Revealed: MMR research scandal) Wakefield’s colleagues ran a mile (Docs dramatic U-turn), as did Wakefield – back to the USA where the tabloid media continued to fete him. Appropriately, he attended the inauguration ball of the dissembling new president, Donald J Trump, who would accuse CDC doctors of covering up the supposed links between MMR and autism.
Not to be upstaged, Wakefield live-streamed himself from the event on a self-broadcasting app: “Very exciting times, I wish you could all be here with us.”
Me too, remarks the author.
The disgraced-doctor would remain in the US, going on to widen his opposition to vaccinations and making the notorious documentary Vaxxed, while having a relationship with Australian supermodel Elle Macpherson for whom his charisma apparently held more appeal than his honesty.
Like a vampire awaiting a wooden stake through the heart, Wakefield soldiers on, and his reach extends to Australia. It was reported (The Sun-Herald 14 June 2020) that his film and a follow-up, Vaxxed II: The People’s Truth, would be screened on a ‘mobile billboard’ bus travelling the nation on behalf of the Australian Vaccination-risks Network’, which cranked up its efforts during the height of the COVID-19 scare.
In late May medical experts said decades of progress on vaccination education could be undone, and called for an urgent vaccine campaign. In the current context, this book could not be timelier.