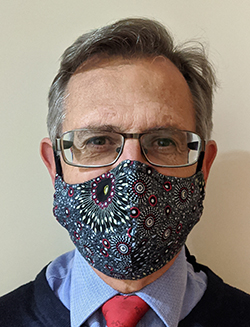 Once again everybody was tense. The bipartisan effort along with similar commitments from industry and government began unravelling. It became State against State against Commonwealth, business against public health and person against person. There was increasing anger directed to the perceived perpetrators of Lotharian guards, bogan Logans and covid Karens. The “We’re all in this together” resolution was falling apart.

At the time of writing in late August, NSW, Queensland and other States appear to have dodged a bullet at least for the time being but the potential to repeat the Victorian experience or worse is clear to all.

Long term changes in behaviour seem likely and wearing of masks may become de rigueur, as perhaps suggested by our front cover. A cottage industry for making fashionable masks exploded overnight and like toilet paper before it, the spot market in masks peaked. Wearing masks is currently only compulsory in Victoria but if you’re handy at the sewing machine NSW Health has the pattern for you.

On page 12 Bulgarr Ngaru Medical Aboriginal Corporation describes its approach to dealing with COVID-19 in a high risk population. Their experience reflects that of many general practices around the country, but had to be tailored to the cultural norms of their patient population. Strict hygiene and social distancing were the main foci, with telehealth working well for this highly mobile population group, suggesting an increasing role for this in the future.

Telehealth is good but not a panacea. A virtual consultation will never replace face to face. On page 17 Keen Street Clinic practice manager, Debbie Elliott, makes this point and notes that for some patients, particularly the elderly, a visit to the clinic is falsely seen as high risk. Such patients can be reassured that anyone at risk of covid-19 COVID-19 infection is not seen in GP surgeries but redirected to a hospital Fever Clinic or to the COVID-19 testing services run by the pathology companies. While repeat prescriptions can be organised through phone consultations, conditions such as heart and lung disease and chronic pain still need regular clinic review.

Australian Nobel prize winning immunologist, Peter Doherty, believes there is an 80% chance of a coronavirus vaccine within the next 12 months. In his 2013 book Pandemics Doherty predicted how a global pandemic would spread, and his hypothesis has proven to be essentially correct. In an Australian Financial Review Zoom lunch on May 8 his speculation on how Victoria might be affected by a second wave was remarkably prescient.

Doherty’s predictions are based on his years of experience and on his close following of the multiple COVID-19 vaccine trials around the world, some of which are in late stage testing. While optimistic he cautions that it is only data driven science that will produce a successful vaccine. On page 37 Alstonville pharmacist, Alannah Mann outlines the latest Australian efforts to produce a coronavirus vaccine.

It took 15 years to develop the first vaccine against the 1919 Spanish influenza. Through the work of thousands of scientists like Doherty it seems feasible that a vaccine against a virus which did not exist a year ago could be  accomplished in less than 12 months.

However, in science nothing is a given. It is only through rigorous scientific research that is statistically significant and reproducible that advances can be made. Progress marches to its own drumbeat and not that of the political cycle.

Nor does science care about publisher’s deadlines. On page 22 Robin Osborne reviews “The Doctor who fooled the World” about the scandal surrounding Dr Andrew Wakefield who held that measles vaccination caused colitis and autism. Even well respected journals such as The Lancet can give credence to claims that are proved subsequently to be false. The public's concerns, or hopes, about new treatments can result in poor outcomes as seen by this episode and similarly with the  recent claims for hydroxychloroquine in the COVID-19 pandemic.

Invest in basic research pleads the Australian Virology Society (on page 19) so that we are better prepared for the next pandemic. They make the case that such an investment is financially viable. The challenge for Australia is to commercialise these breakthroughs locally and create a sustainable Australian environment for innovative drug development and production.

Basic research over the last 20 years is now finding a place in day to day practice. Options for patients with arthritis, skin disease and cancer treatments are exploding.

On page 31 advanced oncology trainee at Lismore Base Hospital, Ben Watson, outlines the current approaches to immunotherapy in haematology and oncology and on page 8 the doctors from the new North Coast Dermatology look at advances in the treatment of psoriasis through medications that affect the T helper cell 17 pathway.

On September 28 Drs Jenkins, Claudia Curchin and Hsien Herbert Chan from North Coast Dermatology are the presenters at the Nordocs webinar on psoriasis treatment for general practitioners. Members are encouraged to register at Eventbrite and join the presentation and subsequent Q&A.

Nordocs congratulates Drs John Vaughan and Austin Curtin on their awards in the 2020 Queen’s Birthday Honours list. John was a stalwart of the Port Macquarie medical community prior to his retirement and was recognised for his services to medicine and surf life saving. Austin Curtin has served the North Coast community for over 30 years as a surgeon and educator. On page 5 he reflects on his past, present and future in an interview with Dr Chris Ingall.

“The king is dead. Long live the king.”

This is the first edition of NorDocs magazine and reflects the change in direction for the Northern Rivers General Practice Network, as determined at its last Annual General Meeting. NorDocs magazine is now sent to all medical practitioners between Grafton and the Queensland border.

The NRGPN’s journal GPSpeak had been in almost continuous publication for 24 years and has reported and advocated on North Coast health matters for most of that time under the guiding hand of Medical Editor, Dr Andrew Binns.

GPSpeak thanks all our past readers and sponsors and hopes that NorDocs magazine will continue the tradition of serving the North Coast medical community, their patients and our general readers.