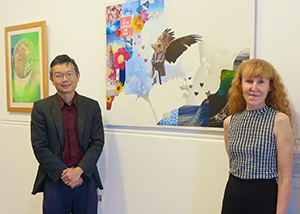 “P shared a tale of woe that began towards the end of 2017 and continues to this day,” writes Mark in the artist’s statement, or ‘Student’s Reflection’, that accompanies the work.

“My artwork looks at a physical manifestation of the condition (as ulcerated tissue) and works it into a landscape reflecting both the idea of the Silk Road and the patient’s tour of the Australian East Coast undertaken in search of medical help.”

“My life has been a ‘treadmill of misery’ with an autoimmune disorder,” P says.

“I woke up on Christmas Day with a mouth ulcer which multiplied... I get ulcers in my throat and lips. They are very painful and can appear overnight. If severe, I am kept awake drooling through the night.  My immune system is shot and my skin is paper-thin from prolonged steroid use. I have had 50 hospital admissions in the last 3-4 years.  My last admission was for sepsis and I have had multiple pneumonias. It’s only cleared up once since it all happened.

“I was a fitter and turner by profession. Before, I did lots of outdoor activities like swimming and surfing. I enjoyed a healthy lifestyle previously.  It has turned my life on its head. It’s hard on the kids and had a big impact on my relationship. At times, I felt disempowered and have felt institutionalised. It’s a painful mystery.”

The show’s concept was to match ten former BDH in-patients with Diploma of Visual Arts students - one male, nine female - who would encourage them to share details of their lives and illnesses. Then the artists would create works representing the patients’ experiences of their journeys.

As Tracey Beck explains, the original plan was to arrange face-to-face meetings between subjects and artists. Then COVID-19 came along. Arranging videoconference calls was the next option, but when that seemed impractical, one-hour phone calls were held, meaning the artists had to undertake their work sight-unseen. Portraits or visually identifiable pieces were not allowed for confidentiality reasons, although human figures are present in some of the works.

Suggested questions to be asked of the patients included, “In your words can you tell me about your main illness or injury that led to your recent hospitalisation?,” “Can you describe how you felt when you were unwell? What symptoms did you experience?”, “What were your thoughts or feelings at the time?”, “Has your day to day living or quality of life been impacted?”, and “Do you have any advice you would like to share with anyone else who might be going through a similar experience?”

First names were used in the interviews, later de-identified for the exhibition. As would be expected, medical conditions varied, from the little understood Behçet's Disease through to Diabetes, Stroke, Osteoporosis, Parkinson's Disease and falls injuries (“I slipped on a pine cone and fell. I didn’t know that my femur was fractured until three days after the accident.”)

Most patients were elderly, with the oldest participant having notched up 94 years. Needless to say, the artists were much younger, and they were clearly affected by the experience.

Writes Monique Jerome about her accomplished seascape Gra-Gra’s Story,  “G has always been drawn to the ocean, Shaw’s Bay in particular. He has a natural affinity with the ocean and speaks fondly of regularly going crabbing, snorkelling, fishing and walking on the beach daily with his partner and their family.  My oil painting in response to G’s story captures the ocean environment that brought him so much pleasure before the onset of Parkinson’s.”

The organisers of this innovative show are rightly proud of the outcome, which ran for over two months at Northern Rivers Community Gallery in Ballina and was visited by hundreds of locals and visitors.

Described as a meeting of medicine, art and education, the exhibition forms part of a broader inquiry into the importance of empathy between patients and the healthcare system that is being conducted by Dr Khoo, who has a special interest in neuro-degenerative issues and a research association with University of  Wollongong and Griffith University. Tracey Beck, the Northern NSW Local Health District’s only Diversional Therapist, is also closely involved.

The project goes well beyond ‘art therapy’, as the patients are not the artists, although they are benefiting from seeing their experiences reflected back to them in visually creative ways. The artists, in turn, have undergone experiences not anticipated in their studies, meeting – albeit virtually – with strangers, learning to conduct interviews, and hearing stories that were often well outside their comfort zones.

Both sides of the equation agree that the results were extraordinary, and to remind patients of their experience they were provided with prints of the exhibited artworks. The originals will go on permanent display in the corridors of Ballina District Hospital, with the outcomes of the project being incorporated into a research paper under development by Dr Khoo and Ms Beck.

* Diversional Therapy practitioners work with people of all ages and abilities to design and facilitate leisure and recreation programs. Activities are designed to support, challenge and enhance the psychological, spiritual, social, emotional and physical wellbeing of individuals.