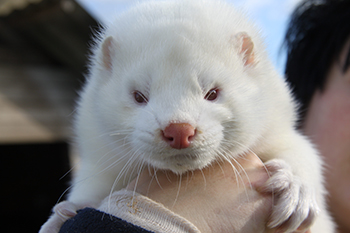 Secondly, there’s the risk of human to animal transmission to a susceptible species, some of which are endangered. The Leakey Foundation has warned of the potential risk of SARS-CoV-2 to non-human primate species in zoos, research facilities and most importantly in endangered wild populations. Apes and all African and Asian monkeys are identical to humans at all of the binding sites, so they are likely as susceptible to SARS-CoV-2 as humans are. Some of these critical primate species number in the thousands and could face extinction if infected.

Thirdly, there is the risk of the establishment of reservoirs of SARS-CoV-2 infected species in the wild. This could make future control and elimination of the virus from human populations difficult. A species called Neovison vison, the European farmed Mink, hasn’t fared that well.

Mink are carnivorous semi-aquatic members of the mustelid family, which also includes otters, ferrets and weasels. They are farmed intensively for their fur in Northern Europe, North America, Ireland and Russia. Mating occurs in March, and after a life spent in cages under controlled lighting, those not needed for next season’s breeding are killed by gassing with carbon monoxide about nine months later for their pelts - so that we can exercise our God-given right to look like a 1930s bootlegging mobster or Marilyn Monroe in Gentleman Prefer Blondes. (Memo to H. sapiens: “we can do better”).

In September 2020, in Jutland Denmark 12 human cases Covid19 were found to be caused by a mink-derived variant of SARS CoV-2. This variant was colourfully named the “Cluster 5” mutation. The cases ranged from ages 7 to 79, with all having links to the mink farming industry. The Danish authorities were concerned that this had potentially serious implications for diagnostics, therapeutics and vaccines.

On November 5 the Danish Government ordered that all Danish mink must be culled (i.e. gassed en-masse and bulldozed into mass graves), a total of 17 million, give or take. A political storm ensued, which ultimately led to the resignation of Denmark’s Agriculture Minister, largely over the fact that there was no legislative basis for the decision.

So far, the “Cluster 5” mink Covid19 mutation has not proved dangerous and seems to be a dead-end in people because it hasn’t spread. However, it caused concern because variations in the virus spike-protein region could affect the immune system’s ability to detect the infection. Many vaccines also train the immune system to block the spike protein.

The end-result was that the 17 million dead mink were collateral damage. [Sickeningly, many culled mink were soon ‘rising from the grave’, as their gas bloated bodies caused the shallow burial pits to burst from the ground.

Carl Linnaeus named our species Homo sapiens in 1758 (from Latin, sapiens the wise). Alternatives might be Homo hubris, Homo imprudentis or Homo arrogans. It is probably too early to tell which is the most suited.