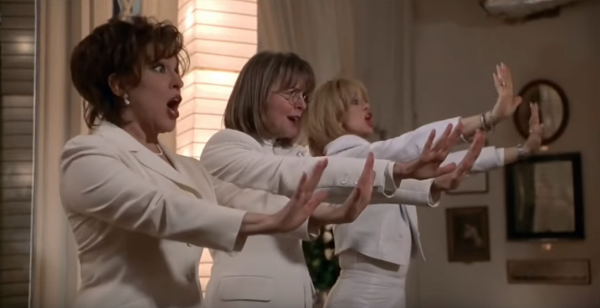 Lesley Gore’s “You Don’t Own Me”
by Bette Midler, Dianne Keaton and Goldie Hawn from The First Wives Club1

As summer ended we read the news that COVID-19 related deaths in the USA exceeded 500,000 - that’s deaths, not cases - while in Australia the case tally stood at  under 10, with no new cases in NSW at the time.

Phase 1a of the Australian Covid-19 vaccination national roll-out strategy has just commenced. It will take the rest of the year to vaccinate the majority of the over-fifty years population but once 70,000 quarantine border workers and 100,000 high -isk health workers are vaccinated by early April the rest of the country can exhale with a big sigh of relief.

NorDocs, like the rest of the nation, will remember 2020 as a year of turmoil and disruption. Few of us will miss it. However with new challenges, new directions and new blood we are  eager to see what 2021 will bring us.

It is a tribute to Australia’s health system and our public health workers that we have weathered this storm better than nearly every other country. There is the feeling that life is getting back to normal, although the ‘new normal’ is still spoken about. Australia’s unemployment peaked at 7.5%, which was less than predicted, with the recovery in job numbers in the last four months being strong and much faster than in previous recessions.

The Federal and State governments of all persuasions, and their Oppositions, have united behind the efforts to contain and manage the virus and the downturn in the economy. They have mostly succeeded, with only occasional bickering when under the most extreme public (and media) pressure.

Australia as an island surrounded by a large maritime border, distant from other populous areas, has been in a fortunate position. Look at the situation in Indonesia or PNG. It has been easier for us, to bowlderise  former Prime Minister Tony Abbott, to “stop the viruses”.

The Federal Health Department has stated that, “Rolling out the COVID-19 vaccine is one of the greatest logistical challenges in the nation’s history.” It will fall to general practice to deliver the vast majority of these vaccinations. The tasks are challenging at all levels of the program, from national to state and regional levels and even down to the pointy end at the GP clinic itself.

With so many unknowns and variables, and given the pressure to get the vaccine out with minimal delay, the task was never going to be easy. Some suggestions for the program that made their way into the initial plans may have been visionary but were clearly never going to work. They had survived the first round of brainstorming in Canberra and were “pencilled in” before more experienced administrators took control.

While it is easy to be critical, success will be defined as getting the majority of the Australian population vaccinated by the end of the year. Keeping things simple may be the key. A loose translation of 19th century German Field Marshal Helmuth von Moltke’s remark, “No battle plan ever survives contact with the enemy” is apt.

Even as we start the program it is confusing to have two different vaccine treatments. The ‘brand name’ debate is hotting up in Europe as I write. This however merely reflects the difficulties of trying to manage a new and unknown disease. In early 2020 the Federal government was competing with other governments around the world for vaccines of unknown efficacy. Backing at least a couple of horses was only sensible.

Some vaccine efforts such as the University of Queensland’s failed, not because they were ineffective, but because of other unforeseen effects. UQ’s vaccine would have rendered many Australians positive for AIDS; falsely positive, but what alarm that would have caused.

It is therefore unlikely that the current Pfizer and AstraZeneca vaccines that Australia has purchased will be the best choices in the future.

Previous uploads of data from GPs to the AIR were voluntary and in some cases were incentivised by payments for lodging updates. Given the seriousness of the COVID-19 pandemic and the huge scale of the nationwide vaccination program, the government recently enacted the Australian Immunisation Register Amendment (Reporting) Bill 2020 mandating compulsory upload of COVID-19 vaccination data records.

While most  GPs would regard this as reasonable, given the nationwide crisis we are facing, many have been surprised at the harshness of the penalties for failing to lodge the data within a two-week period. In theory the penalties could amount to several hundreds of thousands of dollars. It does look pretty heavy handed.

The only way GPs could cope with the requirements to upload such a large number of vaccine record submissions is by using an automated system linked to the practice’s usual electronic record system. These systems are now largely in place, which is quite an achievement but it does put the final nail in the coffin for non-computerised general practice.

GPs are also concerned about the logistics of roll-out of the vaccines nationwide. In recent years the Department has taken an increasing command and control approach to the delivery of influenza vaccines. Delaying the commencement of vaccination until mid-April and tightening the window for delivering the vaccine has put increasing pressure on general practice logistics. The difficulties have been further compounded by problems with the supply chain resulting in hundreds of hours of wasted practice time cancelling scheduled clinics and then scrambling to reinstate them when the supplies finally came through.

Adding two COVID-19 vaccines to this mix, each given at least a few weeks apart and separate again to the influenza vaccine, has the making of a logistical nightmare for thousands of practice managers around the country.

While few GPs believe the rollout will be trouble free, coping with uncertainty and imperfections in the system is something with which most of us have had long experience. We’ll probably muddle through.

On a brighter note - congratulations to Dr David Scott on receiving the Order of Australia Medal in the recent Australia Day honours. On page 7 Dr Brian Pezzutti marks David’s many achievements leading to this award.

Technical solutions and technical problems abound in medicine just as they do in general life and some long for the “good old days”. However, as Franklin Pierce Adams had noted, “nothing is more responsible for the good old days than a bad memory”.

In this issue we report on a few of the many IT related innovations whose progress has been accelerated by the COVID-19 virus. On page 13 Well Mob outlines the resources they have developed to reach the indigenous community with assistance for the social and emotional wellbeing of their clients.

Last year’s rains resulted in worsening allergies in the spring and also more mosquito borne infections such as Barmah Forest and Ross River viruses. Local councils in conjunction with the North Coast Public Health Unit are trialing an SMS notification program on the risks and preventative measures for these diseases (page 16).

On page 24 North Coast neuropsychologist, Lynne Ridgeway, writes about the ways in which virtual reality is being used in various conditions such as pain management, psychological and neurological disease. VR is not just for games, apparently.

Getting the right information to the right person at the right time is a goal of modern IT. In Who’s Where (page 15) we look at measures to also getting it to the right place. Keeping track of where doctors are currently practising is an ongoing task that still requires manual updating by practice managers.

On page 36 Tim Marsh updates us on the Lismore Base Hospital eReferral system for outpatient clinics. The trial to date has been positive and its success makes it a possible model for wider dissemination throughout the LHD and State.

The North Coast Allied Health Association (NCAHA) is one of the five member organisations of the North Coast Primary Health Network. On page 32 they outline their vision for the North Coast. Their vision for patient centred, multi-disciplinary, team based, collaborative care echoes the same values as the Australian Medical Home model of care. Alas this concept seems to have gone out of fashion in government health circles.

NCAHA laments that the current approach is failing on the North Coast and they call for stronger inter-disciplinary integration and training, particularly for those dealing with chronic and complex care patients. Current health care funding models perpetuate the ineffective status quo and they challenge the government to once again innovate in this area.

GOBSAT guidelines (Good old boys sitting around a table) defined the traditional care pathways in a bygone era. They failed on multiple levels, not the least being the lack of an evidence base and nor were they patient centred.

The modern focus for organisations involved in health care is to build structures that reflect the local population and which truly represent their communities. Gone are the days of decree by the white male patriarchy.

On page 9 North Coast Primary Health Network CEO, Julie Sturgess, highlights the importance of diversity for local health organisations mirroring a similar thrust in Australia’s top 300 ASX companies which has the interim goal of at least 30% of Board members being female.

Reflecting this new push to diversity at the NCPHN, Ms Sturgess welcomes two eminent Australians to their Board. Among many other roles Graeme Innes is a former Human RIghts commissioner and Kerry Stubbs is Deputy Chancellor of Western Sydney University. In addition to their wide experience the CEO notes they bring “expertise in the fields of law, social justice, advocacy, and high-level government and administration and add value and diversity to the organisation’s strategic direction”.

Two more vacancies on the Board are yet to be filled. The NCPHN Nominations Committee has identified two highly credentialed candidates from the corporate/charity sectors who are able to address the identified skills gap in the current Board structure. Their appointment is expected to be announced in the near future.

Leaving the Board in 2020 after nine years were previous Chairman, Tim Francis, a GP/anaesthetist from Urunga, Dr Chris Jambour, founder of the Grant Street Medical Centre in Ballina and former Director of Medical Services LBH, Naree Hancock, a North Coast administrator in health and education and Scott Monaghan, CEO of Bulgarr Ngaru Medical Aboriginal Corporation.

The new-look Board is better positioned to take the NCPHN from its former role of a support organisation for primary health practitioners to that of a lean, innovative, technically advanced and efficient commissioner of Commonwealth health services focussed on high value deliverables to the government. This new focus is succinctly elaborated in NCPHN’s 2020-2021 strategic plan.

We wish them luck.

Other recent changes at NCPHN also reflect a lesser role for local health organisations in determining the NCPHN Board’s makeup. While some see this as detrimental it does obviate any potential conflicts of interest where Board members were also associated with contractors to the NCPHN. This had been an area of particular concern to the Executive and the Department.

On page 7 we outline our vision for the Nordocs monthly webinar series and appreciate any feedback, recommendations or assistance with our education program. The Board hopes to reinstate face to face meetings once the vaccination program has reached relevant targets later in the year.

Closer to home, NorDocs also has a new Board, as we report on 6. Local haematologist and new mum, Louise Imlay-Gillespie is the new Chair, with Nathan Kesteven staying on as Vice Chair. We also welcome GP, David Glendinning, to the Board where he will also take on the role of Treasurer.

NorDocs, like the rest of the nation, will remember 2020 as a year of turmoil and disruption. Few of us will miss it. However with new challenges, new directions and new blood we are  eager to see what 2021 will bring us.