Homelessness is a hidden blight that needs healing 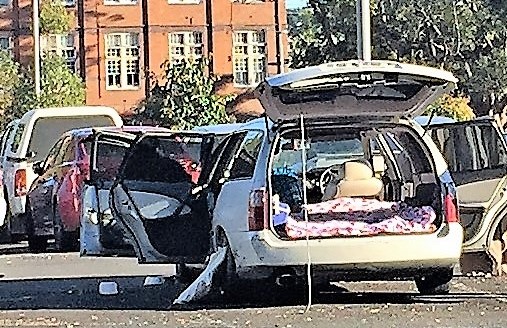 Venture out any night to the picnic grounds, car parks, beach dunes and sporting fields in and around any Northern Rivers town – Byron Bay, Ballina, Lismore, Casino… the list goes on – and you’ll see people sleeping rough. Some will be in park shelters, others in their cars or vans, huddled in alcoves in town, in single tents issued by welfare agencies or under tarps strung between trees.

There’s nothing romantic about “moonlight sleeping on a midnight lake”, especially when the weather is wet or cold, let alone when you’re fearful of being assaulted, even sexually assaulted, or having your meagre possessions stolen by other homeless people, possibly affected by substance misuse or mental health issues, or by someone out to have ‘fun’ at the expense of the vulnerable.

Primary homelessness, as it’s known in the business is just the tip of an iceberg below which lie many more people moving from one accommodation to another, for example refuges or ‘couch surfing’, or living in boarding houses and budget caravan parks. Many are young, not least because of the paltry Newstart allowance, but others are parents, often solo with young children, while older women are a demographic whose numbers are rising.

The reality unseen to most of us is that seven local government areas on the NSW North Coast – Byron Shire sits at #1 - record the greatest rental stress levels (at least one-third of household income needed to pay rent) of the top eight in all NSW, which includes the cities. And as a consequence, we have the state’s worst homelessness crisis.

As well as high rents the problems include rentals being converted to Airbnbs, forcing people to move out and away, and the upward pressure on caravan park rates during holiday seasons, which are now almost year-round.

Public housing wait lists are long, and only minimal construction or conversion is taking place. Support centres such as the Winsome & Lismore Soup Kitchen which has some accommodation, are inundated by daytime visitors seeking food, company and referrals to services. Many have mental health and other issues, and few will ever find work again, whatever their backgrounds.

In the lead-up to the NSW election, the Berejiklian government joined with NGOs to launch a plan to significantly reduce street sleeping, the most publicly embarrassing sign of homelessness, but as with so many initiatives the focus was Sydney rather than non-urban areas. The challenges in our backyard are similar yet unique, not least because we lack services such as night patrols and emergency accommodation.

The medical challenges of assisting homeless people will be well known to doctors – extreme co-morbidity, the difficulty of arranging follow-up appointments, the risk of patients losing (or having stolen) medications or not following dosage timetables. Many GPs outreach to services assisting homeless and/or vulnerable people, including Aboriginal community members, but the challenges are great.

Having access to proper accommodation, whatever one’s status in life, is a fundamental human right and a core foundation of Maslow’s well-known hierarchy of needs, yet so many people cannot achieve it, or worse, are being denied it through no fault of their own. This is certainly an indictment of our society but on a positive note should be seen as a spotlight on where our priorities should lie.