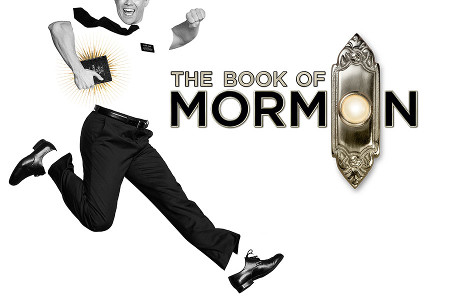 I believe - That the Lord God created the universe
I believe - That he sent his only son to die for my sins
And I believe - That ancient Jews built boats and sailed to America
I am a Mormon! And a Mormon just believes
I Believe, from The Book of Mormon, by Trey Parker, Matt Stone and Robert Lopez

The Book of Mormon, the No. 1 hit musical in Australia, follows the journey of two devout young men as they set off on their mandatory two years of missionary work far from their home in Salt Lake City, Utah where the church is headquartered..

The Book of Mormon is the work of South Park creators, Matt Stone and Trey Parker, which as be expected given this pedigree is irreverent, scatalogical and confronting. In short, not the normal fare of religion, making its success with mainstream audiences seem highly improbable, even though its central theme touches a cord for the religious and irreligious alike.

As is familiar to most Australian households a fresh cohort of young Mormon men set off on a two-year journey to various parts of the world, some of them remote. Identified by their white shirts and black ties these Elders, as they are called, travel in pairs seeking to convert others to the Gospel, as their faith demands of them.

The musical’s opening scene is set in Salt Lake City where a new group of Elders is getting ready for their mission to wherever that may be. Elder Price is handsome, overconfident and overbearing. Both self assured and self absorbed, he dreams of continuing his missionary work in Orlando, Florida, the home of Disney World where make-believe is an industry… so the task should not be too daunting. Alas for him, he is to be sent to “darkest Africa”, Uganda.

Price is dismayed. Moreover, he is to be joined by Elder Cunningham who is slovenly, mendacious, lazy and generally untrustworthy. As they embark on their mission Elder Price sings of their mission to convert their assigned town to the true faith (You and Me, But Mostly Me).

Uganda is no Orlando. The villagers face famine and poverty, and AIDS is widespread. The town is ruled by a local despot. Violence is common and life is hard and often unpredictably short. The Mormon strike rate is low - previous missionaries have failed to convert any of the locals.

Despite his confidence in his missionary abilities, Price  also fails. His arrogance turns the villagers against him and he becomes despondent. So it falls to Cunningham to continue their missionary work.

Although clearly unqualified Cunningham makes up for his rudimentary understanding of the three testaments (the Old, the New and the Mormon) by supplementing them with his extensive knowledge of another trilogy, Star Wars, Lord of the Rings and Star Trek. His enthusiasm and the colourful world he creates for his flock is a far better one than they currently inhabit. The villagers convert, including the local strongman, and are baptised into the new faith.

As part of the celebrations the villagers re-enact the story of Joseph Smith (as told by Elder Cunningham). Price is aghast at this new interpretation of the Gospel but comes to realise that it is the believing not the truth of the story that matters. This revelation revitalises him and the missionaries stay on to continue to help the village.

While religious views are on the wane in Australia they are growing worldwide. At the last census 52% of Australians identified as belonging to one of the Christian denominations, 8% to non-Christian religions, while 30% had no religion.

Worldwide the four largest religions - Christianity, Islam, Hinduism and Buddhism - account for 75% of the world’s population. Only 16% of the population do not subscribe to religious views. The remaining 10% practice one of the other 4,000 religions in the world today.

Dozens of new religions start each year. They often form around a charismatic leader but may splinter or disappear when the founder dies. In an attempt to prevent this some religions demand that their practitioners proselytize their faith. This can be in their daily working lives, in traditional or social media, and for some the expectation is to work as missionaries in distant places.

The tenets of these new religious movements vary widely. Some may take traditional teachings and expand upon them. Other religions develop completely new texts as the basis for their beliefs.

Changes in sexual practices are adopted by some religions. Celibacy or polygamy have been features of many different religions over the centuries, although the latter is now outlawed in nearly all countries. Same sex relations and marriages are also taboo in many religions.

The rise of these new religions has been seen as threatening to both established religions and non-believers alike. As a result a number of anti-cult movements have arisen since the the end of WW2. However, the principle of opposing new religions goes back through the millennia and has led to dozens of wars and the loss of millions of lives. The battle for Christian hearts and minds in the Reformation and Counter Reformation attests to this.

Modern Christian anti-cult movements mostly target religions that deviate from the view that the Bible is the sole basis for the faith. As such the Mormons, Jehovah's Witnesses, Christian Scientists and the Unification Church are the most scrutinised of the larger, new religions.

The term cult has developed pejorative connotations in recent times. The lyrics of I Believe quoted above make three unverifiable statements. To most Australians exposed to religion in their childhood the first two sound unexceptional but the third is new and jarring.

All religions are new at some point in time. Reflecting on this some sociologists have said that a cult is simply a religion that has not been around for long enough (viz. cult + time = religion).

Noted writer, actor and wit Stephen Fry has been described as the ultimate Renaissance man. As a scholar and a skeptic he takes an analytical mind to the problems he sees in the world. He, however, recognises the beauty and solace that religion can bring to an individual’s life. In conversation with another noted atheist Richard Dawkins, Fry describes how he once considered becoming a high Anglican priest. He loved the cathedral, the pomp and the ceremony. However, as he discussed with his bishop, he had a problem with the God thing. The Bishop sent him away but said he could come back once God had spoken to him. Fry is still waiting to hear.

People of all walks of life hold religious view. Medical practitioners are no exception. However, as medical practitioners, trained in the scientific tradition we attempt to base our practices on verifiable facts. Doctors will defend the statistically significant, reproducible results of a double blind, placebo controlled trial with vigour. Science is our other religion.

General practitioners have a long term relationship with their patients. They are said to be experts in the patient rather than her diseases. Where science cannot cure the patient and death is imminent alternative approaches will be tried by some patients. Religion helps many cope and deathbed conversion has a long history.

As medical practitioners we must apply our medical science to the care of the patient but also acknowledge that where this fails patients will find comfort in non-scientific approaches. Accepting this is in the patient’s best interest, I believe.