Happy health reporting season… or is it? 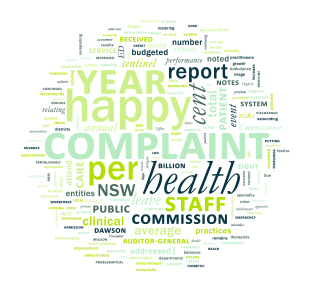 In advance of festive season we have reporting season, at least for government agencies, with two reports on health system performance being issued in late November, one by the NSW Auditor-General, the other by the Health Care Complaints Commission.

For the figure-fond the Health 2019 Audit Office report states that the budgeted expense for the 15 local health districts, one being the Northern NSW LHD, and two speciality networks, increased from $18.3 billion to $19.4 billion in 2018–19. However, “The 15 health entities recorded unfavourable variances between actual and budgeted expenses.”

It seems a major problem is that health workers – totalling 105,105 clinical staff, and 16,466 other staff – aren’t using all their leave entitlements: “Managing excess annual leave remains a challenge for NSW Health,” the report notes, “36.9 per cent of the workforce have excess annual leave balances”, and this should be addressed in the 2019-20 year.

It added, tantalisingly, that “staff who perform key control functions” should be encouraged to take at least two consecutive weeks’ leave a year in order “to mitigate fraud risks.”

Next comes the clinical performance of the public health system. In 2018-19 there were an astounding 2,926,425 attendances in NSW emergency departments, up 3.3 per cent on the previous year. As the state’s population is around eight million, this suggests almost one-third attend an ED each year, although sicker, and perhaps poorer, people would attend more than once.

As a tribute to hard-working staff, 81 per cent of patients’ clinical care in EDs is completed within 4 hours (averaging out the triage categories).

Credit, too, to the Ambulance Service, where demand also rose, perhaps explaining why staff were paid more overtime than other health entities – nearly ten per cent of total salaries and wages. The Auditor-General recommends the service further reviews the “effectiveness of its rostering practices.”

Sentinel events, relating to a public hospital admission that results in the death of, or very serious harm to, a patient is described in media-speak as “medical mistakes” and they always grab headlines: “Highest in three years” (SMH 23 Nov 2019). There were 22 sentinel events in 2018–19, four more than the previous year and eight more than in 2016–17. Putting this in context, “On average, 1 sentinel event occurred in 86,931 patients discharged (1 in 104,049 for 2017–18).”

Into this space steps the Health Care Complaints Commission whose annual report notes that “the year continued the historical pattern of an increasing volume of complaints received”, with a total of 7,299 complaints in 2018-19, more than double that of a decade ago.

“Based on the average growth of more than 10% per year, the number of complaints is projected to reach around 8,000 complaints in 2019-20,” said Commissioner Sue Dawson.

Complaints relating to general medicine were the commonest, accounting for 47.2 per cent, with surgery at 10.3 per cent.

A total of 398 complaints were resolved during assessment, well up from the previous year and “a very positive improvement in the use of early intervention. The Commission will be looking for ways to further increase the number of complaints addressed in this manner in 2019-20.”

However, the timeliness of completing investigations continues to be an issue, with more than 40 per cent taking over a year, at an average of 335 days each. The HCCC has a larger budget and more staff than before, although as Commissioner Dawson noted, there is “a continuing picture of complaint complexity that is apparent throughout this report.”

Unregistered practitioners, from naturopaths to cosmetic therapists and much in-between, were noted as problematical, while the Commission had received “multiple complaints regarding misleading and unsafe practices by anti-vaccination (“anti-vax”) campaigners and the potential risks that such persons and associations pose to the public health and safety.”