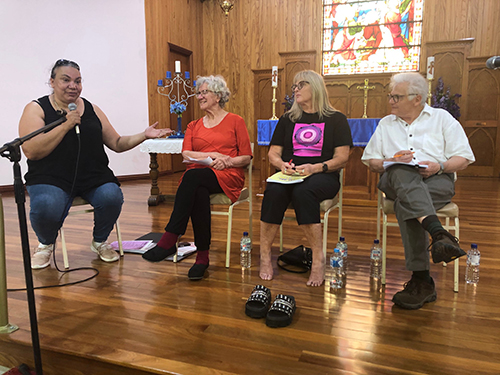 The first forum to discuss the effects of the Clarence Correction Centre (CCC) on the community was held on Saturday at St Matthews Anglican Church in South Grafton. Its focus was the impact of the new jail on women, and Indigenous women in particular.

Around 40 people came along. There was a broad section of the community present including Clarence Valley Councillors Debrah Novak and Greg Clancy.

The privately run CCC is being built at Lavidia, 12 km south of Grafton, and will open in July next year. Run by SERCO it will house 1400 men and 300 women, at least 100 of whom will be Aboriginal women. State Member Chris Gulaptis has described it as ‘the fourth largest town in the Clarence Valley’.

The forum was organised by local activists Colin and Joyce Clague and chaired by Associate Professor Pauline Clague from the Jumbunna Institute at UTS.

The expert panel comprised Bundjalung woman Emeritus Professor Judy Atkinson, an expert in intergenerational trauma and healing; Debbie Kilroy, a lawyer and CEO of Sisters Inside; and Dr Andrew Binns, a GP at Jullums Aboriginal Health Service in Lismore who cares for residents of Balunda, a residential diversionary program for Aboriginal men located on a farm in the Clarence Valley.

One of the broader issues raised was the number of extra people that the community will have to provide services for, with health, housing, welfare and social services already over-stretched. Ms Kilroy said there’d be an influx of women and children moving to the Clarence Valley to support their loved ones in the new facility. These families would be under-privileged with their own mental health and chronic disease problems and their children will need to attend school. And most of them would not find jobs, adding to local unemployment.

And with a Deloitte report stating that around 140 people will be discharged from the new jail each month, the rate of homelessness in the region is expected to rise sharply. As for the promise of jobs, Ms Kilroy said the SERCO run Gatton Prison west of Brisbane employed few locals.

“What we’ve seen is that the labour pool does not come from Gatton, it comes from Toowoomba or Brisbane and local people don’t get jobs. And if local businesses such as butchers and vegetable suppliers think the prison is going to use them, they’re wrong. Can they supply 4000 meals three times a day seven days a week? Of course not, SERCO brings road trains in from outside to supply food and other necessities.”

The secrecy around the prison and its accountability is also a concern with SERCO having a commercial in confidence contract with the NSW government. Ms Kilroy said it was up to the community to keep the prison accountable.

“Don’t become part of the system and silence yourself. Expose them, challenge SERCO and bring their activities out into the community so the community can do something. It’s essential to remain independent and speak truth to power.  In Queensland, through intensive lobbying, we’ve managed to have two prisons taken out of SERCO’s hands and given back to the state as a result of corruption and a lack of accountability.”

Sadly, Aboriginal women who are incarcerated don’t only lose their freedom but their children as well. The state normally puts their children into care.

Ms Kilroy said Aboriginal women in prison rarely see their children as the state claims it doesn’t have the resources to organise jail visits. And later when the women want to regain custody they are told they have no relationship with their children. and this is of course due to the state refusing to facilitate family visits.

“Getting GPs to come to rural areas is very difficult at the best of times. And to suddenly find a whole lot more will be a major challenge.

Further community meetings are planned to discuss issues raised by the new prison and how these might be addressed.