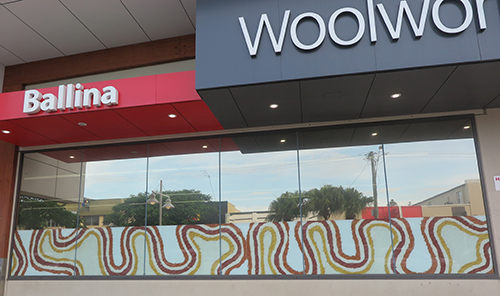 The most public, hence most viewed, work by the late Albert (Digby) Moran spans the facade of Woolworths River Street, Ballina store. The work, or more accurately works plural, as the materials used are quite different, is made up of a painting, Floating Through My Spirit Home, affixed to a large, eye-level glass window, and panels of drilled corten steel*, Someone’s Always Watching You, translated from Digby’s cloth paintings.

Inspired by the Bundjalung side of his heritage and nearby Cabbage Tree Island where he grew up, the works were an innovative commission by the supermarket in 2014. They will remain here in perpetuity, a short walk from the Richmond River that figured so prominently in the artist’s life. (Another large work adorns the Goonellabah Sports & Aquatic Centre).

While Uncle Digby may have been destined to become an artist he was certainly not born to the occupation. He left ‘Cabbo’ at the age of 16 to work in the local cane fields, making a radical career change a few years later by joining the legendary Jimmy Sharman’s boxing troupe, walking in his father’s footsteps.

The troupe travelled to shows all over Australia, but the lifestyle, fuelled heavily by alcohol, got on top of him and at the age of 42 he quit drinking and in 1991 he enrolled in an art course at TAFE.

Uncle Digby’s talent quickly emerged as he began focussing on imagery from his Bundjalung culture, stressing that his inspiration was strictly local – “I have always been a saltwater man” – and he would not appropriate images such as barramundi or crocodiles held sacred by other Aboriginal groups.

The popularity of his work soared, locally, nationally and further afield, notably Germany where a number of successful exhibitions were staged. In Lismore, one of the towns he called home, Digby was well supported by collectors as well as Lismore Regional Gallery where, in late 2019, his show ‘Growing Up on the Island’ received great acclaim. This was covered in GP Speak.

After many productive years of painting and mentoring aspiring young artists Uncle Digby died in mid-January at the age of 71. We offer our condolences to Uncle Digby’s partner Kerry Kelly, his children, grandchildren and other family members and friends.

*Corten or weathering steel is a group of steel alloys developed to eliminate the need for painting, which forms a stable rust-like appearance after several years' exposure to weather.