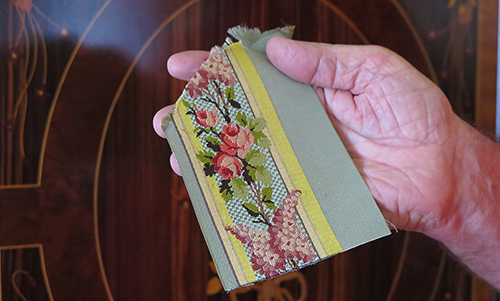 Few, if any, living Australian artists are selling works for one million dollars, but then how many spend more than six years to see their creations come to fruition?

These factors alone make the Hannah Cabinet, the masterwork of local cabinet-maker Geoff Hannah, truly unique. On top of that come various details of the work: 92 drawers, 34 types of timber, four rare species of shell and 17 types of precious and semi-precious stones.

Less visible to the naked eye are the secret drawers, one of which holds a swatch of fabric from Marie Antionette’s boudoir – as part of his Churchill Scholarship Geoff travelled to Europe and was made privy to the fabulous furniture at the Palace of Versailles where even the restorers were impressed by his skills and knowledge. The fabric was a parting tribute to his expertise.

Geoff was made an Honorary Fellow of Southern Cross University in 2009 and was awarded an OAM in 2018 for services to the visual arts. Other works include a cabinet displayed at the Governor-General’s residence in Canberra.

The last step on the Hannah Cabinet’s journey remained uncertain until recently when a massive fundraising effort, boosted by the NSW Government but mainly achieved through private donations, reached the $1m mark and ownership of the work was secured for Lismore Regional Gallery.

Fundraising team member Brian Henry, a former Lismore mayor and a cabinet making student of Geoff Hannah, said that to his knowledge it was the first time a piece of art valued at $1m would be on permanent display in regional Australia.

So this is a million dollar milestone in every sense, but not, Geoff stresses, a pathway to his retirement. He will continue to press ahead with other artistic projects and mentor a stable of students whose creations, as a recent exhibition showed, have every chance of becoming million dollar men and women in coming years.