With a construction cost of $798 million – around four times that of the Christmas Island detention centre, whose architecture it resembles closely - the Clarence Correctional Centre (CCC) will hold the record of being Australia’s biggest and most expensive jail. It may also become the nation’s most unpopular, based on reactions from local community members in recent months, as the construction phase comes to an end.

The centre, close to completion at Lavidia, is located on rolling rural land some 27 kms from Grafton, the ‘capital city’ of the Clarence Valley. Cattle graze, the paddocks have greened up after recent rain, and heavy equipment works seven days a week, not only on the CCC project but on the Woolgoolga-Ballina highway construction. A sceptic might suggest that this other work, massive in scale, has helped the CCC work to hide in plain sight.

Despite claims of its economic benefits to a struggling area, and an improved way of managing sentenced inmates, many locals are increasingly worried about the impact it will have on their region.
The CCC is designed to house 1700 inmates on a footprint of more than 90,000 square metres. This cohort will include around 300 Aboriginal men and 100 Aboriginal women.

It is the largest prison contract ever awarded in Australia, the winner being a consortium called Northern Pathways, which includes Macquarie Bank, the NSW Government and the publicly listed British company Serco whose track record – in the UK, Australia, NZ and elsewhere – has been, to put it politely, chequered.

Serco, which will operate the jail when it opens this July, has said the operational contract is worth $2.6bn over 20 years. It is recruiting 600 workers for the facility.

The first forum to discuss the effects of the CCC on the community was held in November 2019 in Grafton. Its main focus was the impact of the new jail on women, and Indigenous women in particular. Around 40 people attended from across the community, along with an expert panel comprising Bundjalung woman Emeritus Professor (SCU) Judy Atkinson, an expert in intergenerational trauma and healing; Debbie Kilroy OAM, a lawyer and CEO of Sisters Inside; and Dr Andrew Binns, a GP at Jullums Aboriginal Health Service in Lismore whose duties include primary care for residents of Balund-a, a residential diversionary program for Aboriginal men located on a facility in the Upper Clarence Valley.

The two-hour forum was chaired by A/Prof Pauline Clague from the Jumbunna Institute at the University of Technology, Sydney. A wide range of issues was canvassed.

One of the broader concerns raised was the number of extra people for which the community will need to provide services, as health, housing, welfare and social services are already over-stretched. With an estimated 140 people to be discharged from the jail each month, and post-incarceration support often minimal, it is feared homelessness levels will rise sharply along the North Coast. 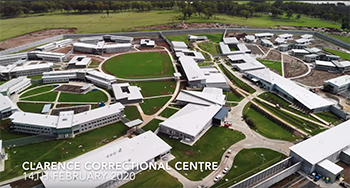 Ms Kilroy told the forum there would be an influx of women and children moving to the Clarence Valley to support inmates. It’s possible that upwards of 2000 women and children will be seeking affordable accommodation near Grafton, and with high rental costs and limited housing stock, this does not exist. Further, the distance from town to the CCC is a good 30-minute drive.

Ms Kilroy said in addition these families would be challenged by their own mental health and chronic disease problems, and their children will need to find school and, in all likelihood, additional support to successfully adapt. Most of these relocated adults would have problems finding jobs, further adding to local unemployment.

“And when the state does not provide communities with the extra services they will need with a jail in the region it actually puts a strain on everyone and people become desperate,” she added.
“Sadly, Aboriginal women who are incarcerated don’t only lose their freedom but their children as well. The state normally puts their children into care.”
Ms Kilroy said Aboriginal women inmates rarely see their children as the state claims it doesn’t have the resources to organise jail visits.
“And later when the women want to regain custody they are told they have no relationship with their children. And this is due to the state refusing to facilitate family visits.”

Dr Binns described the new prison as “Like a big hospital with limited health services and lots of chronic disease, mental health problems and serious addiction issues.
“Getting GPs to come to rural areas is very difficult at the best of times. And to suddenly recruit a whole lot more will be a major challenge.”
He called the Balund-a facility “a farm with no walls, a diversionary facility that runs a wide range of programs for men over 18, concentrating on rehab.
“I think there should be more of these kinds of facilities for men and women in Australia so they wouldn’t have to build more jails. When someone is jailed they lose access to Medicare. The Justice Health and Forensic Mental Health Network runs health care within prisons, often providing minimal health care for people with serious health issues.
“Many will have infections such as Hepatitis C, which is now cured fairly easily with the right medicine. Blood borne viruses also occur at a much higher rate than outside. Injecting drug use without sterile needles and unsafe tattooing is known to occur widely in correctional facilities.
“And we see people with brain injuries from past trauma, including FASD, which results in problems in later life for these people. They often end up in the prison system and they should be getting care outside.”
Dr Binns told the forum that his current focus was on the lack of communication between health services inside and outside jails.
“Getting information about what happened to a prisoner inside is really difficult with Justice Health and I don’t know how it will be with Serco. We are investigating this through a committee at the North Coast Primary Health Network.”

The confidentiality, or some might say secrecy, around the prison and its accountability is a concern, with Serco having a commercial-in-confidence contract with the NSW government. Ms Kilroy said it was up to the community to keep the prison accountable.
“Don’t become part of the system and silence yourself. Expose them, challenge Serco and bring their activities out into the community so the community can do something. It’s essential to remain independent and speak truth to power. In Queensland, through intensive lobbying, we’ve managed to have two privately run prisons taken over by the state government.”
In March 2019 an inquiry prompted by the number of assaults on staff prompted the state government to take over the running of two high-security facilities, including the Southern Queensland Correctional Centre operated by Serco. The reason for the high assault rate was lower staff numbers, according to the Corrective Services Minister.

Professor Atkinson has worked in prisons running volunteer education programs for women, including in Alice Springs where Aboriginal women make up the vast majority of female prisoners.
There she started a Circle of Wellbeing program and worked with women who were jailed for violent behaviours and were then locked into a circle of loss and grief and in immense pain.
“Every woman I worked with over five years finally disclosed sexual abuse,” she said.
“All the women without exception had stories of childhood that were so painful and shameful. In the town camps, and this abuse went back generations. The women had seen the massacres, we’re talking about intergenerational trauma.”

Professor Atkinson has the ear of magistrates and judges who have told her they’d prefer to sentence people to programs not prison.
“They said give us a program we can sentence them to, we don’t want them to go to prison. But where are programs we can send these women to?
“Our system, our services are failing our women and the only way that the state can respond is do what it did in 1788, build more prisons.”
Professor Atkinson said Clarence Valley residents need to start thinking about setting up family healing centres and rebuilding community. Such a plan already exists. It was drawn up by her and others at a workshop and is in the hands of the Chair of the local Land Council.

“That family healing centre is critical for the Mums and bubs. There’s not much point in talking about what’s wrong with the prisons, because they are already there. We couldn’t stop them. But we can checkmate them.”
Further community conversations about the effects of the new mega jail and potential community responses are being organised.