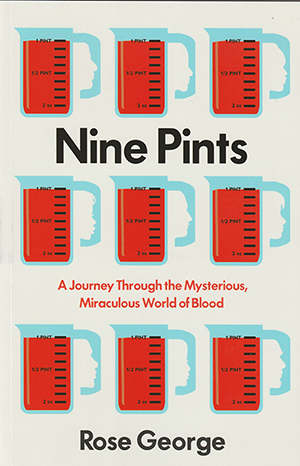 In early February a Thai soldier stole guns from a military barracks and went on a shooting rampage - which he livestreamed - killing more than twenty shoppers and wounding many others. According to an early report, “Authorities have asked for blood donations and put hospitals on alert.”

As with the development of many drugs and medical procedures, the transfusing of blood into trauma victims has its origins in wartime. The author of this unexpectedly gripping book says “the modern era of transfusion” began on 16 October 1914 when a seriously wounded soldier was brought to a field hospital in Biarritz, bleeding out.

In the same ward lay a “small, brave Breton”, recovering from his injuries, who was asked if were willing to share some blood with a comrade.

“It is a sensible request: transfusion required proximity, because you needed to do it quickly to beat the blood clotting,” Ms George explains.
Working without pain relief, doctors cut into the dying soldier’s vein, connected him to the donor by a silver tube and drew blood for two hours. The results were spectacular. The recipient was revived, and leant over and kissed the donor on both cheeks, “because he was French,” as the author quips, “and because he was alive.”

In 1915 indirect transfusion was pioneered by a Canadian surgeon using a technique he had learned in civilian life. This involved withdrawing blood, transporting it in a syringe, and then transfusing. By the end of WW1 casualty stations on the Western front were transfusing to around fifty wounded personnel daily; by WW2 field transfusion unit trucks carried fridges holding 1100 pints of fresh whole blood.

“At the battle of El Alamein,” writes this award-winning journalist and author, “one in ten men received blood, three bottles each.”

In “Code Red”, a later, harrowing chapter on the transfusion theme, we read of the role played by blood and blood products in treating the kind of patients traumatised by the likes of the rogue Thai shooter. Ms George describes the case of a cyclist hit by a London bus, a woman who “probably lived with the belief that all inhabitants of a major city must hold to themselves like treasure: that nothing bad will happen today. Nothing will hit, or crush, or crash into, or stab, or shoot, or damage them.”

Yet this unfortunate, like so many others, not least in terror-prone London, was smashed to Smithereens, “from an old Irish word meaning ‘small pieces’”.

As we follow the cyclist to the ED and the highest level of emergency care available, we are told that “Bleeding” according to Karim Brohi, a trauma and vascular surgeon at Royal London, “is the biggest disease you have never heard of”, accounting for 10 per cent of world deaths, one-third more than the combined fatalities from malaria, TB and HIV/AIDS.

Each of the in-between chapters focuses on a particular topic and a simple list illustrates the diversity, the link of course being blood: leeches, once traded like, and indeed for, slaves; Dame Janet Vaughan, an academic, and Percy Oliver, a public servant, pioneers of the British voluntary blood donation scheme; blood borne diseases, notably HIV; haemophilia; religions that eschew blood transfusion; and two harrowing chapters, largely but not exclusively set in developing countries, on menstrual bleeding and the long struggle to provide accessible sanitary pads and related items to all females without discrimination.

In the first footnote to the first chapter, “My Pint”, the author, a committed blood donor, notes that “the general rule is that blood volume makes up 8 per cent of a person’s body weight… I weigh 65 kg… [so] 5.2kg… Converting kilograms to pints (though it’s mass to liquid) gets 9.15 pints.”
That’s 5.11 litres (assuming the nine pints are the Imperial measure), a little more than ten times the average blood donation in the UK.

Ms George has written about a range of subjects high on the social agenda, including refugees, waste management and how shipping, the “invisible Industry” brings us much of what we consume.

This latest focus, “A Journey Through the Mysterious, Miraculous World of Blood”, is quite a trip.