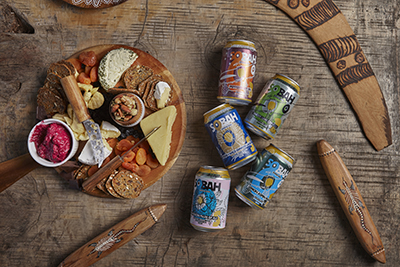 Dating back to the First Fleet, Australians and alcohol have a long and storied relationship. The 2019 Annual Alcohol poll found 79 percent of Australians who consumed 6 to 10 standard drinks on a typical occasion considered themselves responsible drinkers, as did 64 percent of Australians who drink to get drunk at least twice a week. The Foundation for Alcohol Research and Education chief executive Michael Thorn said the nationally representative online survey confirmed once again that, “Australia has a problem with alcohol”.

Although, still largely Australia’s drug of choice, on the flip side of the coin, some Australians are beginning to question the role of alcohol in their lives. According to Drinkwise, 20 percent of Australians abstained from alcohol in 2017, an 11 percent increase from 2007.

One such ex-drinker is Clinton Schultz. The motivation to ditch the booze was a simple one for this father of two -- an earnest request from his kids to give up the “silly drink”. Although Clinton never felt his drinking was out of control, understanding that giving up alcohol was highly likely to make him a more present, healthy, and energetic parent was enough to kickstart his sobriety journey: “I decided to go completely sober for family reasons. For me, that was enough reason to give up drinking.”

Six years later, Clinton hasn’t touched a drop. While it might’ve been fatherhood that motivated him to live a sober lifestyle, it was a lack of beer alternatives that inspired him to create Sobah - ‘sober’, get it? - Australia’s first non-alcoholic craft beer. Immediately recognizing that there were no options that brought the same feeling, flavor and ritual of a good craft beer with mates, Clinton decided to make his own: “I was frustrated with there being nothing available, so I started making stubbies that I’d want to drink.”

He landed on an IPA, a lager, and Pilsner. Clinton, who is also a chef and Gamilaroi man, began selling his brews from his Burleigh Heads food truck.

“Our food truck was doing all native produce and Aboriginal inspired food. As all of our Sobah beers are infused with bush tucker flavors, it was a natural melding of the two.”
It was a hit and soon locals were demanding take home cases. “People began asking if they could grab takeaways. We literally had people coming with growlers and filling them up.”

Sobah has grown in popularity, as more people have become “sober curious” -- a pop culture term that refers to people experimenting with dry periods. Clinton explains that this group makes up his biggest market share.

“Most of the people who drink Sobah, are not sober. They’re usually looking for an alternative for reasons from pregnancy, to being a designated driver, Dry July, or perhaps chronic illness.”

In terms of age demographics, Clinton says that Sobah appeals to those at opposite ends of the spectrum.

“At one end you have the Baby Boomer generation that have probably consumed alcohol for the majority of their lives, and due to health reasons are looking to cut back their drinking and extend their longevity. On the other end, you have young people who are choosing to live more health-focused lives and abstain completely. Having said that, even those young people who are drinking alcohol do so in a far more conscious manner than my generation.”

When asked what he thinks are the biggest hurdles for people looking to make a change, he says, “Social pressure, by far it’s social pressure. Particularly in Australia, there’s an unhealthy attachment between socializing and alcohol consumption.”

Obviously as a man who has walked the path from social drinking to social sobriety himself, Clinton understands first hand the challenges of giving up booze. “People find that when they choose not to drink, their social circle does diminish. For me, almost 95 percent of my friend group dropped away.”

Clinton was passionate about ensuring giving up drinking didn’t lead to social isolation. At the same time, he understood the difficulty of being at a bar and feeling like an outcast,

“It’s very difficult for people to be at a bar and not have a drink in their hand. So with Sobah, we’re trying to fill that gap by giving people something that can put them at ease without feeling pressured to have alcohol.”

Curious to know if people had found Sobah to be a tool to help them through challenging situations, Clinton responded, “At least weekly, we’ve someone write to us telling us that Sobah has assisted them make better choices.”

However, being advocates for sobriety is most definitely not the intention of the brand: “We’re not out to promote sobriety. We’re out to help people think about the choices they make and to have an option available for whatever reason and at whatever time they choose not to drink”.
As Clinton surmised perfectly, “people make better choices, when there are better choices available.”

As demand has risen, so has Sobah’s distribution. Since its inception Sobah has expanded from its Gold Coast headquarters to hundreds of independent retailers in every state and territory. Looking further abroad, even UK giant, Tesco has flagged interest in stocking the line.

Although Clinton is thrilled with the growing interest in Sobah by local independent retailers and punters he has faced struggles in getting Sobah into Australian supermarket chains and restaurants and pubs (especially on tap - prized beer real estate). Even with such progress, it seems that as a nation a “sober night out” is a long way off from being the norm.

However, the fact that people are starting to question their consumption of alcohol, is definitely something worth celebrating, perhaps with an ice cold Sobah Pepperberry IPA.