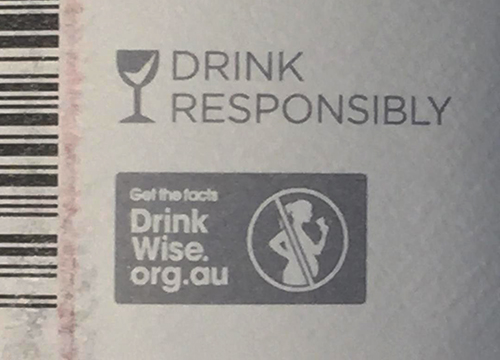 Were the consequences not so serious the decision to go back to the drawing board on warning labels about the risks of consuming alcohol in pregnancy would be laughable.

Now, after the recent meeting of the Australia and New Zealand Ministerial Forum on Food Regulation it is the alcohol lobby that is doing the laughing, announcing in a triumphal media release that, “Common sense has prevailed over the bureaucratic frolic that had been Food Standards Australia and New Zealand's (FSANZ's) draft recommendations on pregnancy warning labels on all alcohol products.”

The reference was to the Forum’s rejection of a clear bottle label warning of the dangers of drinking during pregnancy.

Similar words were used in a media release by an Australian representative on the group, Nationals MP and Minister for Agriculture, Drought and Emergency Management, David Littleproud, who said, “We need to implement this in a common sense way that understands the realities of branding and label manufacturing.”

Put simply, the draft label released by FSANZ in late 2019 was, according to its opponents, too expensive for manufacturers to print and affix. Supporters said it was seen as too explicit and likely to do the job too well. The graphic showed a silhouette of a pregnant woman and the message, ‘‘Health warning: Any amount of alcohol can harm your baby’’. The warning colour red was a part of the design.

Upon its release the design sparked a new attack by the alcohol industry, which pursued a lobbying campaign aimed at generating political opposition to a label that was bigger, more readily understood and more “colourful” than the existing pregnancy warning on all beer, wine and spirits sold in Australia.

The current design, nearly invisible, is positioned beside other product information – alcohol content, manufacturer’s address etc – on bottle labels. It makes no mention of pregnancy, showing only a tiny silhouette of a person who may just be a pregnant woman. It has a minute reference to the website of DrinkWise, a body established in 2005 by… the alcohol industry.

The debate is not new – last year Alcohol Beverages Australia chief Andrew Wilsmore said that while customers ‘‘have the right to know what they’re drinking and what’s in it’’ putting “too much information” on a warning label risked confusion... “You get this thing called label haze, where nothing gets taken in at all.’’

After the postponement decision, the Brewers Association of Australia, claiming to speak on behalf of Australia’s 9.1 million beer drinkers (who “Can’t be wrong”) said, FSANZ's bid to mandate colours – specifically red, white and black – “ignores all practical measures to sensibly shift to mandatory labelling and has sought to impose the largest possible cost option on consumers…

"Food Forum Ministers today brought the bureaucrats back to reality by rejecting their draft recommendations and instructing FSANZ to go back to the drawing board."

Clearly the current labelling hasn’t resonated with pregnant women, even those with keen eyesight: studies in NSW and Victoria show that 59 per cent of women reported alcohol use in pregnancy, often at risky levels before they were aware they were pregnant.

An AIHW study on household drug use found that 49 per cent of women drank before they knew they were pregnant and one-in-four continued to drink thereafter.

The serious health risks of drinking during pregnancy have been well known for years. They include foetal alcohol spectrum disorder, children struggling with learning, behaviour and development, physical disability and intellectual impairment, all caused by a brain injury caused by prenatal exposure to alcohol.

The Forum, along with Minister Littleproud (“No-one is arguing that mandatory pregnancy warning labelling should not happen”) and even to an extent the alcohol industry acknowledge that drinking and pregnancy are a toxic mix. The debate is over how clearly this should be communicated to the public.

To the maximum, according to FSANZ and the Foundation for Alcohol Research & Education (FARE), whose CEO Caterina Giorgi said the “backtrack” by government was due to “relentless pressure” from the alcohol industry that aimed “to keep the community in the dark about the health harms from alcohol use during pregnancy… At the heart of this is the health and wellbeing of our children and communities.

“We will continue to advocate for a pregnancy warning label that is clear, visible and trusted, which will give future generations the best start in life.”

While the industry may be content with the current minimal labelling, it appears to accept that pressure is mounting for an upgraded warning and that doing nothing - apart from continuing its lobbying - is no longer an option.

Time will tell and at this stage there does appear to be a great deal more of it.

Minister Littleproud believes “It’s important that we don’t kick this can [or bottle?] down the road. That is why we’ve asked FSANZ to conduct a review of the wording and colour of the proposed warning labels within three months.”

So it’s literally back to the drawing board in a saga not far removed from the acrimonious fight over cigarette warnings before the packaging gained community acceptance and began making a positive contribution to Australians’ health.