The show mustn’t go on 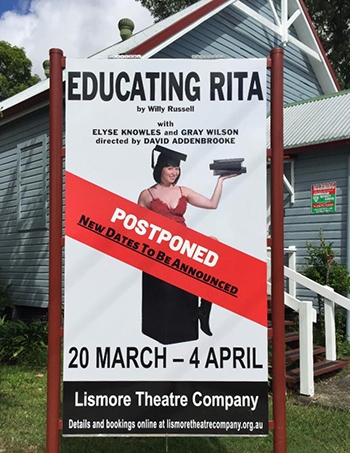 In the latest issue of GP Speak we ran a cover photo of Alstonville GP Luke Hogan performing in Ballina Players’ excellent production of Wicked, The Untold Story, and a story about the wealth of theatrical shows that would be upcoming for the rest of this year. Local doctors were well represented on stages and behind the scenes,

The card for Ballina Players included the blockbusters Mamma Mia and Priscilla, Queen of the Desert, with the story more generally profiling offerings from the Lismore Theatre Company in the recently refurbished Rochdale Theatre, and the unfolding season of the Lismore City Hall based NORPA.

No one could have possibly predicted that soon after the Autumn issue of the magazine was released all of these shows would be cancelled, along with the closure of all Northern Rivers galleries, museums, sporting events, restaurants and cafes, and many of the businesses that were only starting to rebuild after the flood of two years ago.

Such has been the impact of the Covid-19 pandemic, which, despite resolute government action and strong community cooperation, has continued to sweep across NSW, as it has the world at large, causing immense personal suffering, unprecedented (that word again) pressure on the health system, and grave economic and social consequences.

Other groups affected include the Drill Hall Theatre in Mullumbimby and the Byron Bay Community Centre, both of which have regularly hosted a range of top-class amateur and professional shows.

To their creative credit, many companies and individuals around Australia have been streaming their performances to both paying and free audiences. They should be commended - and rewarded - for their efforts, but nothing can replace live performance. It saddens me to think that the last events I may have attended in 2020 were Jonathan Biggens’ astounding interpretation of Paul Keating in The Gospel According to Paul (NORPA) and the Julien Wilson jazz quartet’s exceptional “This World” show (Byron Bay C.C.).

Both were not only national but world class shows and how fortunate we are to have them coming to our area. It will happen again, of course, and hopefully the hiatus will create an even greater hunger for live performance as we realise what we have been missing, despite living in the “age of Netflix”.

Meanwhile, if you have the capacity, consider donating (tax deductible) to our theatre companies, whether directly or by diverting your refunds from cancelled shows. They need us, and we certainly need them. A thriving cultural community is vital for our emotional and physical health.