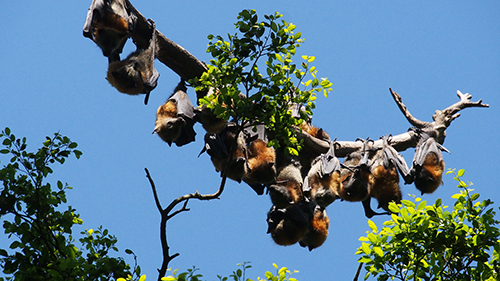 Then there are a few other bat-borne or bat-origin zoonotic viruses: Ebola, Nipah, Hendra and Lyssavirus.
Ever wondered… why bats and, why China?
Firstly, there are a lots of bats. Of all of the world’s mammalian species, 20 per cent are bats. They cover nearly all habitats across six continents. They mostly live in cosy, dense colonies numbering hundreds to thousands of individuals. Plus, they can fly and migrate hundreds of kilometres, which means rapid dispersal of not only the seeds and pollen of important tree species but also dispersal of viruses.
Bats harbour a higher proportion of zoonotic viruses than other mammalian species, and most of the virus families can be found in bats. In 2013 bats were known reservoirs of more than 60 viruses that can infect humans, including coronaviruses, poxviruses, paramyxoviruses, orbivirus and more.
Direct contact between humans and bat secretions, urine or faeces can occur in caves, tunnels, mines and buildings. In some parts of Asia and southern China, bats are used as food and in traditional Chinese medicine, with dried guano used as fertiliser. All these things increase the chance of virus transmission.
Although novel bat viruses with zoonotic potential are being discovered worldwide, China definitely seems to be a hot spot. There are logical reasons for this: it is the third largest country in the world, with the largest population, a diverse climate and great biodiversity, which includes bats and bat-borne viruses.
In a paper submitted in January 2019 researchers, who included China’s Zheng-Li Shi (the virologist dubbed ‘China’s Bat Woman’ - https://www.scientificamerican.com/article/how-chinas-bat-woman-hunted-down-viruses-from-sars-to-the-new-coronavirus1/) predicted an outbreak of a novel zoonotic coronavirus of bat origin most likely in Yunnan province, given the results of extensive survey work.
In 2013, they discovered a SARS-related bat coronavirus, which crucially used the human ACE2 entry receptor, which SARS-CoV-1 and 2 (Covid19) both exhibit. They were pretty spot on, except that SARS-CoV-2 appeared in Hubei not Yunnan.
Which brings me to the naming conventions for new disease-causing viruses. Wuhan, the city in Hubei province where the first cases were recognised, got off pretty lightly with SARS- CoV-2, formerly known as Covid19. The International Committee on the Taxonomy of Viruses followed new 2015 WHO guidelines which state best-practice was to avoid the use of geographic, personal, occupational names which might lead to stigmatisation.
This will no doubt provide cold comfort to the burghers of Hendra, Messrs Creutzfeldt and Jakob, many French Foreign Legionnaires and the former proprietors of Ebola River Scenic Cruises.
Meanwhile, closer to home, in my beloved home village of Alstonville (Tidy Towns Finalist 1985), researchers from CSIRO’s Animal Health Laboratory in 2018 isolated a novel Paramyxovirus that can induce upper respiratory tract infection in ferrets, from bat urine collected from flying foxes in Alstonville: Alston Virus (AlsPV). It is closely related to Simian Virus 5 and may have a similar ability to infect multiple mammalian species.
Yay, we’re famous!